This article has been expanded. Please read it here.

On the 26 of November, 2016 we will mark an important landmark in the history of SOGI jurisprudence. It was on this day ten years ago that a group of 29 experts from around the world gathered in the Indonesian city of Yogyakarta to formulate and adopt a set of 29 principles of international law as it applied to questions of sexual orientation and gender identity. The 29 principles are a restatement of existing international law which spans core civil and political rights like the freedom of movement and assembly  and the right to conscience as well as core socio-economic rights such as the right to education and the right to work.

The 29 Experts authored what has come to be known as the Yogyakarta Principles on the application of international human rights law to sexual orientation and gender identity. There principles are the origin point for what is today referred to as Sexual Orientation and Gender Identity (SOGI) jurisprudence in international law. Some of the key contributions of the Yogyakarta Principles to the struggle for dignity of LGBTI people worldwide are as under*.

Emphasizing the  Universality of rights

All human beings are born free and equal in dignity and rights. Human beings of all sexual  orientations and gender identities are entitled to the full enjoyment of all human rights.

The conceptual task which the Yogyakarta Principles undertakes is to make explicit the implicit norm of human rights law, namely the norm of universality. This is the  unifying thread underlying all the principles. Each principle clarifies that the protection guaranteed by international human rights law is to all persons regardless of sexual orientation or gender identity.

Placing sexual orientation and gender identity on the same plane

While the phrase SOGI is now well established, its important to acknowledge its parentage in Yogyakarta. Before the Yogyakarta Principles were formulated, the only concept known to international law was sexual orientation. Right from the Toonen decision of the Human Rights Committee in 1991 to the aborted Brazil resolution at the Human Rights Council in 2003 the language used was sexual orientation. The Experts at Yogyakarta took the legal equivalent of a leap in the dark when they included gender identity as well and gave birth to the new acronym SOGI. Gender identity founds its way into the principles due to the sustained advocacy by LGBT advocates from the global south for whom the inclusion of gender identity was a non negotiable article of faith. The Yogyakarta formulation was picked up by the Human Rights Council in its three  resolutions in 2011,  2014 and 2016 and today the concept of Sexual Orientation and Gender Identity as  co equal markers of discrimination has  became established within the UN system.

Surprising as it is, none of the legal decisions which preceded the Yogyakarta principles be it the Toonen decision or the decisions of the European Court of Human Rights or the decisions of the US Supreme Court, actually ventured into the terrain of defining what sexual orientation or gender identity was. We owe it to the experts at Yogyakarta for providing a legal definition which would prove an invaluable contribution. Gender Identity and Sexual Orientation as defined in the Yogyakarta principles has been quoted verbatim in judicial decisions, policy documents and used extensively by activists.  The definitions which are a heavily cited part of the principles are as follows :

Sexual orientation is understood to refer to each person’s capacity for profound emotional, affectional and sexual attraction to, and intimate and sexual relations with, individuals of a different gender or the same gender or more than one gender.

Gender identity is understood to refer to each person’s deeply felt internal and individual experience of gender, which may or may not correspond with the sex assigned at birth, including the personal sense of the body (which may involve, if freely chosen, modification of bodily appearance or function by medical, surgical or other means) and other expressions of gender, including dress, speech and mannerisms.

Developing the right to  recognition before the  law

Principle 3 of the Yogyakarta Principles  provides for recognition before the law.

This principle emerged in international human rights law out of the struggle against the racist Nazi ideology whereby Jews were stripped of legal identity and citizenship and rendered non-citizens with no rights. The innovation which principle 3 introduces is to take the right to recognition before the law and apply it to the specific context of gender identity and sexual orientation. From the point of view of transgender people around the world, this is a central axis of struggle. Legal systems around the world routinely deny transgender persons legal recognition in the gender of their choice. Transgender people are rendered ‘rightless’ due to the inability of the legal system to recognise the fundamental right of transgender people to choose one’s gender.

Principle 3 has since then found its way into the domestic legislations of Argentina, Ireland and Malta all of which recognize the right to choose one’s gender.

Everyone, regardless of sexual orientation or gender identity, is entitled to the enjoyment of privacy without arbitrary or unlawful interference, including with regard to their family, home or correspondence as well as to protection from unlawful attacks on their honour and reputation. The right to privacy ordinarily includes the choice to disclose or not to disclose information relating to one’s sexual orientation or gender identity, as well as decisions and choices regarding both one’s own body and consensual sexual and other relations with others.

The right to privacy is normally seen as the right not to be interrupted in the peaceful enjoyment of one’s home. The Yogyakarta principles go beyond this understanding and crystallize a notion of privacy as including  ‘decisions and choices regarding both one’s own body and consensual sexual and other relations with others’. What principle 6 does is take privacy beyond the notion of ‘zonal privacy’ to also include ‘decisional privacy’ and ‘relational privacy’. Thus when we say that anti sodomy laws violate the right to privacy, we are not asserting the  patriarchal understanding that a  ‘mans home is his castle’ (i.e. the untrammelled right to do what we want in the zone of the home) but asserting that forming intimate ties with others of the same sex is a part of ‘relational privacy’ and  ‘decisional privacy’. The jurisprudence on privacy in principle 6  links privacy through the notion of  ‘decisional and relational privacy’ to the conceptual framework provided by ‘dignity’ and ‘autonomy’.

Addressing the need for protection from medical abuse

No person may be forced to undergo any form of medical or psychological treatment, procedure, testing, or be confined to a medical facility, based on sexual orientation or gender identity. Notwithstanding any classifications to the contrary, a person’s sexual orientation and gender identity are not, in and of themselves, medical conditions and are not to be treated, cured or suppressed.

While the law, state and society are key violators of rights on grounds of sexual orientation and gender identity, principle 18 draws attention to the role of medicine and the medical establishment. One of the sources of violation is the World Health Organisation (WHO) authored International Classification of Diseases-10 (ICD-10) under which  both gender identity and  ‘ego dystonic sexual orientation’ are psychological disorders and hence conditions to be cured.  This in turn is responsible for aversion therapy, hormonal therapy and other forms of invasive medical procedures all of which are ‘treatments’ for changing one’s sexual orientation. As far as the pathologisation of gender identity is concerned, transgender advocates have argued that while consensual medical intervention is necessary it should not be  under a rubric, which pathologises gender identity.

As far as SOGI jurisprudence has travelled, there is still long way to go. We need to keep invoking the core idea, universality, whenever LGBTI persons human rights are violated.

While the use of the principles to combat both violence and discrimination is important we should also remember that the principles were formulated 10 years ago. These ten years have witnessed the exponential growth of SOGI jurisprudence and concepts which were unknown at that time are today finding their way into legislation and policy.

One example would be the use of the term sex characteristics by the Gender Identity, Gender Expression and Sex Characteristics Act, in Malta, to conceptualize the basis on which intersex infants are subjected to medically unnecessary intervention. The rights of trans sex workers and the rights of LGBT refugees which are often ignored may require specific elaboration within the framework of the established principles.

There is a need to both reanimate the principles and to fill in its gaps so that Yogyakarta Principles continue to be the beating heart of SOGI jurisprudence in the years to come.

*This article elaborates on some of the themes articulated by PoojaPatel and Arvind Narrain in the piece you can read here. 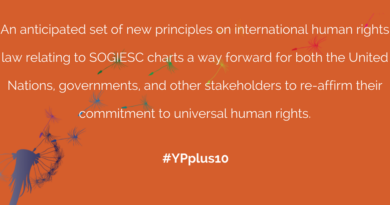 Experts release much anticipated expansion of the Yogyakarta Principles 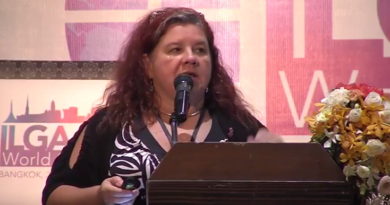 The Yogyakarta Principles: five things every activist should know