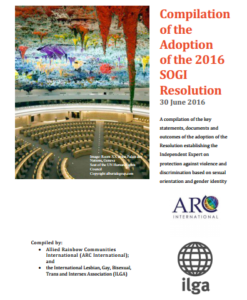 On 30 June 2016, the Human Rights Council (HRC) voted to establish an Independent Expert on Protection Against Violence and Discrimination based on Sexual Orientation and Gender Identity.The establishment of the Independent Expert – a UN Special Procedure – is a tool to ensure sustained and systematic attention by a major organ of the United Nations to human rights violations on grounds of sexual orientation and gender identity, and can reinforce the fact that such human rights violations should be treated with due seriousness under international law.

This mandate can be used by persons from around the world to shed a global spotlight on violations and advances in their own local context; it creates one lever that can be activated in aid of local struggles and gains; it adds one more mode of sharing best practices from national contexts and simultaneously bring appropriate pressure on States – ensuring accountability for violations of human rights and the realization of freedom and equality for all.

The resolution was brought to the HRC by seven States, all from Latin America: Argentina, Brazil, Chile, Colombia, Costa Rica, Mexico and Uruguay, together termed the “core group”. They filed their draft resolution on 17 June1. Eleven proposed amendments were then filed on 28 June by Pakistan on behalf of the States of the Organization of Islamic Cooperation (the OIC), except for Albania.

The voting process was therefore destined to be complicated from the start. Finally it involved a series of 17 votes: a preliminary vote on a “no-action motion” – a procedural maneuver aimed to block even discussing the resolution – brought by Saudi Arabia; then 11 votes on the filed OIC amendments; a last-ditch attempt to oppose retention of four separate parts of the text (brought by Qatar and the Maldives); and, finally, the vote on the resolution itself.

The counter arguments were led by Mexico, the only member of the core group actually a member of the HRC in 2016, and ultimately, the resolution passed: 23 votes in favour, 18 against and 6 abstentions, with seven of the amendments having been voted into the text. If you are interested in an overview of the vote of each State, Annex 4 sets this out across all 17 votes. In Annex 5 you will find an annotated version of the resolution showing how the various votes amended or retained the text.

What is of great interest and importance in the entire process is not just the vote outcomes, but also the statements made by various States explaining their votes. This is why we have created this compilation.2These statements give us an insight into what States think of SOGI issues. Just to illustrate some of the rich documentation on State opinions that follows, we provide here a few examples:

The above is merely illustrative of the range and depth of issues which were tackled in the 3.5 hour marathon voting session. The statements by 29 diverse States tell us about their understanding of SOGI, their notion of the appropriate balance between cultural and religious sensitivities with the respect for human rights, divergent views of the meaning of universality, and much, much more. You will find strong arguments and weak. You will see what irks some governments and inspires others. You can find governments ambassadors struggling to talk about sexuality. You can even find a reference to astronauts.

If you can, do take time to digest the explanation of the amendments; to read the Explanations of Vote by countries at the end. Study again the reasons given by States to oppose amendment after amendment. Perhaps you are mainly interested in what a particular government has said, and so we have provided in Annex 6 an index for you to quickly find when a particular State speaks. For further reading, or to contact us, you will find some links in Annex 7.

Finally, we acknowledge gratefully the work of Avinaba Dutta who painstakingly transcribed the entire proceedings.

We sincerely hope that this compilation will be a useful tool to you in your work.