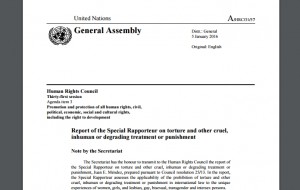 Lesbians, gays, bisexual, transgender and intersex people will have as of today a new tool for promoting visibility, raising awareness and building support regarding their rights. During the 31st regular session of the Human Rights Council, the Special Rapporteur on torture and other cruel, inhuman or degrading treatment or punishment has launched his latest Report that is the first one to focus on the specificity of how torture affects LGBTI people.

In his latest Report, Special Rapporteur Juan E. Méndez highlights the “impact of entrenched discrimination, patriarchal, heteronormative and discriminatory power structures and socialized gender stereotypes” and how the torture and ill-treatment framework “can be more effectively applied to qualify human rights violations committed against persons who transgress sexual and gender norms”. He also identifies gaps in prevention, protection, access to justice and remedies; and provides “guidance to States on their obligations to respect, protect and fulfill the rights of all persons to be free from torture and ill-treatment”.

The Report was presented on March 8th before the Human Rights Council, during the 31st session that takes place in Geneva from February 29th to March 24th. This month-long event gathers States representatives and civil society activists on human rights issues expressed in reports, high level panels and special discussions on violations.

In his conclusions, the Special Rapporteur on Torture recommends “States have a heightened obligation to prevent and combat gender-based violence and discrimination against women, girls, and lesbian, gay, bisexual, transgender and intersex persons that amount to torture and ill-treatment, committed in a variety of contexts by both State and actors”.

He adds that “States must decriminalize same-sex relationships between consenting adults and repeal all laws that criminalize persons on the basis of their actual or perceived sexual orientation or gender identity or expression”. He also recommends that States develop “comprehensive, coordinated policies and programmes to combat gender-based discrimination and violence, inclusive of gender-sensitive trainings of public officials and the implementation of public education and awareness campaigns, must be developed and implemented at all levels”.