It has been an intensive time since our last newsletter, hopefully you’ve been able to keep up to date with our activities through the listserv and website! Here’s a short summary of what we’ve been up to the past few months:

This session of the HRC saw the first formal UN discussion on human rights, sexual orientation and gender identity. The debate arose out of HRC resolution 17/19 (of June 2011) which requested High Commissioner Navi Pillay to prepare a report on “how international human rights law can be used to end violence and related human rights violations based on sexual orientation and gender identity”, and called for a panel discussion to discuss the findings of the report in a “constructive, informed and transparent dialogue”.

The panel was opened with a video message by UN Secretary General Ban Ki Moon and a statement by the High Commissioner for Human Rights. All panellists commended the OHCHR report, noting that abuses on these grounds occur in every country of the world, and that every government is duty-bound to protect the rights of all of its citizens. Hina Jilani (Pakistan) highlighted the Supreme Court of Pakistan’s decision concerning transgender persons’ right to identity, noting that solutions can emerge from countries where violations are still occurring. Other panellists included Laurence Hefler (US), Hans Ytterberg (Sweden) and Irena Bacci (Brazil).

We heard strong statements delivered by civil society colleagues including Linda Baumann of Out-Right Namibia and Pan Africa ILGA on behalf of a large group of NGOs, Justus Eisfeld of GATE on gender identity, Alli Jernow of ICJ on international law, and Kasha Jacqueline from FARUG and CAL on LGBT rights in African contexts. 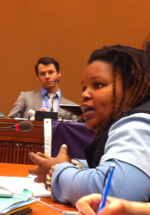 ARC and the ICJ co-hosted an NGO roundtable to raise awareness of sexual orientation and gender identity issues on Monday, 5 March. Titled “LGBT Issues for the Curious: (Almost) Everything you Wanted to Know about Sexual Orientation & Gender Identity but were too Diplomatic to Ask”, the roundtable afforded an opportunity for LGBT human rights defenders from all regions to share their perspectives with diplomats. The roundtable was facilitated by ARC Co-director Kim Vance, and Linda Baumann of Out-Right Namibia.

Kim Vance and Sheherezade Kara were pleased to attend the AWID Forum in Istanbul, where ARC co-hosted a well-attended panel

discussion with GALANG, Out-Right Namibia, IGLHRC and FARUG. The panel was titled “Highlighting the InterSEXions: Sexuality, Economy and LGBT Rights”, and explored the relationship between poverty and the denial of sexual rights, the way in which sexuality is used to obscure public debate on economic policies or practices, and the best practices of groups working with economically disadvantaged LBT persons. The panel was moderated by Kim Vance, and panellists included Linda Baumann, Kasha Jacqueline, Anne Lim and Jessica Stern.

Over the past few months we have undergone a process of re-evaluating and formalising the SOGI listserv policies. This was done through an online questionnaire to list members, asking their views on strengthening the list. Thanks to all who participated in the process! The new policies can be found on our website in English, French and Spanish. A new process has also been implemented to systematise the sign-up of new list subscribers. Existing list-members can recommend a new member for subscription by filling out the form.

ARC has submitted an application for ECOSOC accreditation with the UN. Although we expect this to be a lengthy and difficult process, it should in the long term greatly facilitate our work at the international level. Our application should go to the NGO Branch for screening in 2013 and then on to the highly politicised Committee on NGOs. The Committee will then give a recommendation to the ECOSOC for a final decision.

At the beginning of June ARC, HRW and the ICJ held a SOGI retreat for diplomats at the Centre for Humanitarian Dialogue in Geneva. We were please to have representation from all UN regional groups, and a focused brainstorming session was held on possibilities for the future SOGI initiatives at the UN.

In July, John Fisher presented at the Global Media Forum, as part of a workshop on the Right to Education and Sexual Self-Determination. The Global Media Forum brings together journalists from around the world to discuss current issues and challenges, and provided an opportunity to engage media representatives in discussion of rights-based perspectives and issues of sexuality. Hosted by the German Institute for Human Rights, the workshop also featured presenters from Germany, Slovenia and Kenya (via Skype), and resulted in vigorous discussion.

Whilst there was no specific SOGI initiative during this session of the HRC, the issues were brought in as relevant concerns under many agenda items and debates. The High Commissioner for Human Rights has been increasingly proactive, and raised SOGI-related concerns on freedom of expression and assembly in her opening statement to the Council. A broad range of Special Procedures mandate holders integrated the issues in their work, both in thematic reports and reports on country visits. South Africa also reaffirmed its commitment to SOGI issues by delivering a strong statement with Brazil on follow-up to the panel discussion that took place at the 19th session.

There were also some worrying trends this session – Egypt was systematic in its challenges throughout the agenda of the Council, a group of States consistently challenged language on multiple grounds of discrimination, and we saw the entry onto the Geneva scene of fundamentalist groups such as Family Rights Watch International.

Our report of the session, available here outlines statements made on SOGI issues in General Debates, Interactive Dialogues and formal Panel discussions, as well as in side events. Some key statements, including NGO interventions, are annexed at the end.

Human Rights Council Resolution 16/3 (March 2011), “Promoting human rights and fundamental freedoms through a better understanding of traditional values of humankind” tasked the HRC Advisory Committee to “prepare a study on how a better understanding and appreciation of traditional values of dignity, freedom and responsibility can contribute to the promotion and protection of human rights”.

A deeply worrying draft study was presented at the 8th session of the Advisory Committee in February 2012. Amongst other things, the draft suggests that “all international human rights agreements … must be based on, and not contradict, the traditional values of humankind. If this is not the case, they cannot be considered valid”. ARC raised concerns with the draft during the session and prepared an NGO statement that was supported by 100 NGOs from around the world.

The drafting group then prepared a second draft of the study. The second draft was significantly improved and took on board virtually all NGO concerns relating to the harmful effects of traditional values. We remained concerned, however, about some elements, such as paragraphs dealing with the controversial notion of “individual responsibility”. The second draft of the report was considered by the Advisory Committee at its 9th session, from 6-10 August 2012. A summary of the discussions can be found here. Finally, the Advisory Committee adopted a decision requesting the Human Rights Council to defer the submission of the final study until its twenty-second session in March 2013 in view of the challenges in incorporating views and comments by Committee Experts into the revised study. 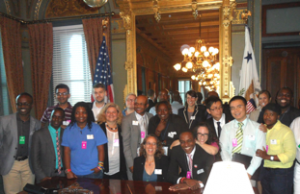 During the World AIDS Conference in Washington in July, 2012, ARC organized a Global Village workshop on the Activist’s Guide to the Yogyakarta Principles, facilitated distribution of the Principles and Guides, participated in a key meeting at the White House, facilitated by the Council for Global Equality, discussing, among other issues, US engagement in upcoming UN initiatives and follow up to the SOGI resolution and panel, and organized several strategy meetings with NGO partners to discuss initiatives at the upcoming sessions of the UN General Assembly, particularly around the extrajudicial executions resolution.

We are pleased to announce the publication of the final report on the International Dialogue which took place in Saint Lucia earlier this year. The report contains detailed summaries of the  various discussions which took place, as well as presentations.

The Dialogue report is available in English, French and Spanish.

HRC21 will take place from September 10 to 28th 2012 at the UN in Geneva. A main focus of the session will likely be a new resolution on “traditional values” which is being tabled by the Russian Federation. John and Sheherezade are also involved in the ISHR Advanced Geneva Training Course as tutors for the session.

The Building Global Democracy project has developed “Power to the Globally Excluded”, a toolkit from the papers and presentations from the meeting in Rio last year.

Kim has now completed the development of the paper she wrote into a book chapter for a soon-to-be-released book published by Warwick University Press.

For the next 14 States coming up for review, the deadlines for NGO submissions are:

Submissions can be as short as an e-mail of a few paragraphs, and a maximum of 5 pages, and can be sent to uprsubmissions@ohchr.org, with a copy to arc@arc-international.net.

See our brief guide to the UPR in English, French or Spanish. Watch this space!