Breaking news: it has just been announced that a resolution on human rights, sexual orientation and gender identity will be presented at the current September session of the Council, led by Chile, Uruguay and Colombia. Global advocacy in capitals will be needed to help ensure the success of the initiative. Stay tuned for further updates as the situation develops …

The ARC team has been as busy as ever over the last months, participating in strategic meetings and conferences, delivering UN training sessions, engaging in ongoing advocacy with partner organisations, as well as internal evaluation and planning for the next year. As always we’ve tried to keep this brief…

On June 21st , ARC attended the 1st ILGA North America Regional Summit. This was the first chance for ILGA members in Canada and the United States to convene outside of a World Conference, in order to develop strategy and vision for the region. In addition to discussing national level issues in the region, participants mapped out areas where a North American network could have impact internationally, for instance, in the OAS, the Commonwealth and the Francophonie. The summit also heard from ILGA Co-Secretary General, Gloria Careaga, about the upcoming World Conference in Mexico 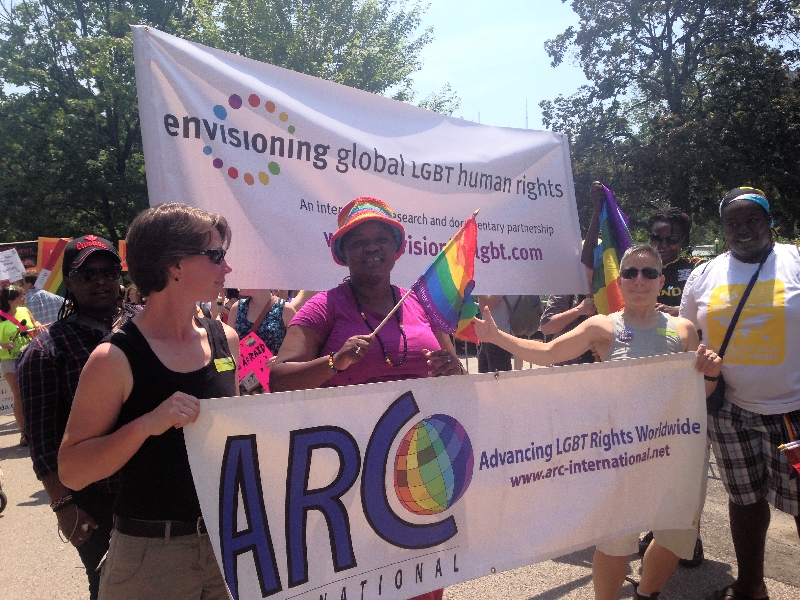 World Pride in Toronto, Canada (June 20-29) was a packed 10 days consisting of a major human rights conference (#WPHRC14), meetings, celebrations, protests, and parades. ARC supporters carried our banner in the hugely popular and political Dyke March, and also walked with the Envisioning Global LGBT Human Rights partners as part of the International Contingent in the World Pride Parade. ARC participated actively in the human rights conference and was able to meet with many of its international partners for networking and strategizing. ARC Co-Director, Kim Vance, was also delighted to meet Canada’s first openly lesbian head of state, Ontario Premier Kathleen Wynne, and her partner at a reception at Queen’s Park.

The International AIDS Conference, which took place in Melbourne from July 20-25, opened on a sombre note recalling those lost on flight MH17, as well as all those lost to HIV through neglect, stigma and discrimination. Yet participants at the conference of more than 13,000 people also expressed a positive, almost defiant, affirmation of the need to do more.

At the closing ceremony, Chris Beyrer affirmed to a standing ovation that he was the first openly-gay President of the International AIDS Society, and pledged a renewed focus on inclusion and human rights in the HIV response moving forward. The next International AIDS Conference will take place in Durban, South Africa in July 2016.

From August 10-16th, 4 facilitators (including ARC Co-Director, Kim Vance) and participants representing 18 organisations from 12 countries in the English-speaking Caribbean attended an intensive workshop to increase Caribbean advocacy through UPR/OAS processes. The training was hosted with the support of British High Commission, ARC International, COC Nederland, Arcus Foundation – Social Justice, Astraea Lesbian Foundation for Justice, Inter-American Commission on Human Rights and Heartland Alliance International. The training was an excellent opportunity for ARC to develop and utilize new regionally-specific learning tools that are fun, interactive, informative, and well-received by participants. 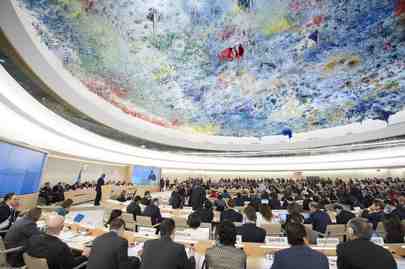 HRC26 ran from 10-27 June 2014. Although there was no specific initiative on sexual orientation, gender identity or intersex (SOGII) issues on the Council agenda, SOGII issues were frequently addressed by States, NGOs, experts and Special Rapporteurs, advocating for the recognition of the rights of LGBTI persons and deploring discrimination and human rights violations committed against them. However, a number of States continued to argue that sexual orientation and gender identity are not universally agreed upon concepts and that they threaten the integrity of the family unit.

Working group reports from the 18th session of the Universal Periodic Review (UPR) were formally adopted by the Council at the end of the second week and provided NGOs opportunity to comment on the process. Many States and NGOs took the floor to express concern about human rights violations of LGBTI people.

Civil society was extremely active in raising SOGI issue throughout the Council agenda, during general debates, interactive dialogues with special procedures, UPR report adoptions, and in parallel meetings. Especially noteworthy is the joint statement on SOGII made during the general debate under Item 8 on the follow-up to and implementation of the Vienna Declaration and Programme of Action, on behalf of over 500 NGOs from more than 100 countries.

Despite the efforts of civil society and supportive States, the Council adopted a harmful resolution on “protection of the family”. Led by Egypt, the resolution failed to acknowledge violations that occur within family structures, and to include agreed language on the diverse family forms. During the voting stage the Council shamefully voted to censor a discussion on whether to include this language. The resolution called for a panel discussion to be held at the next HRC session in September.

Finally, several relevant side events were held including on the “Current state of human rights of LGBTI persons around the world”, “Criminalization of sexuality and reproduction”, “Perspectives of LBTI women”, and “Human rights and progressive Islam”.

Read our report of the session here.

ARC was pleased to participate in the first convening on the human rights of LGBTI persons hosted by Wilton Park: a UK-based international forum for strategic discussion. From 1-3 September, John Fisher joined stakeholders from civil society, States, the UN and other stakeholders around the world in a retreat-type setting for three days of intensive discussions on next steps for international institutions and civil society in protecting the rights of LGBTI persons.

During World Pride, the Envisioning Partners from across the globe congregated in Toronto for a number of activities, which both allowed us organize among ourselves for the final years of the project, and to showcase some of the amazing outputs emerging from the project partners. Examples of the outputs included a feature length documentary screening of “No Easy Walk to Freedom” about developments around the 377 decision in India and a discussion with Indian activists, a video/photographic art installation called “The Imagining Home Project” which is a digital legacy of life stories and activism from particular social and cultural locations, and a thread of workshops and presentations throughout the World Pride Human Rights Conference. The project will be conducting UN research and interviews between September and December in New York, and has also identified a number of publication goals, including a co-authored paper examining the local, regional and international aspects of the “culture/tradition vs. human rights” discourse.

In July, the ARC team met for a week of strategising, and developing our goals and projects for the upcoming year. Whilst maintaining our strong focus on facilitating access to UN human rights mechanisms, we’ll be developing stronger and more accessible online resources and materials for those seeking information on UN SOGI-related advocacy, as well as building our own capacity to work on a wider range of mechanisms. We’ll also be moving forward with our commitment to bring more dedicated attention to gender identity issues, and continuing our ongoing engagement in strategy meetings, conferences and trainings around the globe.

As part of our commitment to community dialogue, self-reflection and strategic analysis, ARC commissioned two external evaluation reports earlier this year: one assessing SOGII advocacy at the UN over the past 10 years, including challenges, successes and next steps, and one assessing ARC’s own role, including positive contributions, areas where our work could be strengthened and possible future directions.

We are excited to advise that both reports are nearing completion and will soon be available for distribution. We are very grateful to the research team: Jack Byrne from New Zealand, Dorottya Karsay from Hungary and Lucas Paoli from Brazil, as well as to the more than 100 people (including community-members, allies, diplomats and UN staff) who contributed to the project by sharing their views through survey responses and interviews.

We look forward to sharing the results, and engaging in dialogue on how the findings can contribute to strengthening global LGBTI advocacy in the years to come.

HRC27 is due to take place from September 8 to 26. As usual there will be a number of opportunities to raise awareness of human rights violations based on sexual orientation and gender identity. These include general debate following the update by the new High Commissioner, interactive dialogue with relevant Special Procedures (e.g. on water and sanitation, and arbitrary detention), relevant panels, UPR report adoptions and general debate under items 3, 4 and 8, as well as the possibility of a resolution addressing ongoing violence and discrimination against LGBTI persons. Read more on the session here and follow our Facebook posts and tweets (@ARCint1) for updates throughout the session. We’ll be using hashtags #hrc27 and #ItsTimeHRC to call on the Council to address SOGII related violations more systematically. Join the discussion online!