If it has been some time since our last newsletter, it’s a sign that we’ve been busy working on exciting projects and engaging in conferences and convenings over the past months. However, we’re pleased to have a moment now to write to you and share what we’ve been up to since July.

Earlier this year ARC International celebrated its 10 year anniversary, and in August the three of us met for a week-long retreat to strategise and consider our goals and priorities for the next few years. As we move forward, ARC will of course maintain its strong focus on facilitating NGO access to UN mechanisms, but will also dedicate increased attention to developing information and resource tools, supporting more systematically the many requests we receive for capacity development and strengthening international engagement in diverse regions, and will also partner with trans groups and networks to bring more dedicated attention to gender identity issues internationally.

John speaks at HRC24 side event

The 24th session of the Human Rights Council ran from 9-27 September 2013. Although there were no specific initiatives at the formal session on sexual orientation and gender identity, many relevant issues were on the table including dialogue with the High Commissioner for Human Rights, the annual discussion on gender integration, general debates providing chances to raise human rights situations of concern, and to comment on the new “traditional values” report.

Working group reports from the 16th session of the Universal Periodic Review were formally adopted by the Council at the end of the second week, which provided NGOs opportunity to comment the process. Many States and NGOs took the floor to express concern about recent developments in Cameroon and Russia..

Furthermore, the Council adopted 39 resolutions during the session, including on the rights to peaceful assembly and association, the right to health, combating FGM, arbitrary detention, reprisals against human rights defenders, maintaining civil society space, promoting human rights through sport, and child, early and forced marriage.

Finally, several relevant side events were run by States and NGOs including on sexual orientation and gender identity, human rights defenders, challenging a “traditional values” approach, reprisals, human rights violations in the Russian Federation, and decriminalising abortion. John presented on a panel organised by Brazil on combating LGBT-related violence, and an ILGA side event saw the first full-length screening at the UN of our video documentary The Time has Come. 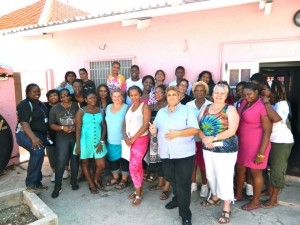 Kim with participants at the Curaçao conference

In 2012, the International Dialogue and Training on LGBT Human Rights was hosted in Saint Lucia. The first of its kind to be staged in the Caribbean, it recorded the highest number of lesbian and bisexual women from around the region in one space. A women’s caucus was organised which highlighted the need for further dialogue. United and Strong, with support from ARC International, took the decision to organize a follow-up conference, and during consultation with various stakeholders, it came to light that the Fundashon Orguyo Korsou/Curaçao Pride Foundation (FOKO) was also planning toward the same vision. Thus began a partnership to organize the conference which took place from 24-28 September 2013 in Curaçao. ARC Co-Director, Kim Vance was pleased to work in partnership with groups leading the initiative in the Caribbean, and attend the conference as a participant and a presenter. Planning is already underway to make this a regular event within the region. 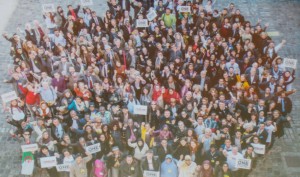 Participants at the Dublin Platform for HRDs

Established in 2002, the Front Line Defenders’ Dublin Platform for Human Rights Defenders is a biennial event which provides a truly unique opportunity for human rights defenders at-risk, from every corner of the world, to come together to share experiences, learn from one another, discuss relevant issues and engage with decision makers from governmental and intergovernmental bodies. The Seventh Dublin Platform for Human Rights Defenders was held in October 2013, and ARC Co-Director John Fisher attended on behalf of ARC, participating in workshops and discussions, and meeting with committed and inspiring human rights defenders from around the world. The Irish NGO GLEN brought specific attention to the challenges faced by LGBT human rights defenders through an evening panel discussion featuring defenders from Russia, Ukraine, Nigeria, Costa Rica and Azerbaijan.

John and Sheherezade attended ILGA-Europe’s Annual Conference 2013, which took place in Zagreb from 24-27 October 2013. The theme of this year’s conference was Family matters! Reaching out to hearts and minds. As always the ILGA Europe team did an amazing job of ensuring informative and engaging workshops, plenary sessions and social and networking spaces.

In October, Norway presented a draft resolution on protection of the rights of women human rights defenders at the Third Committee of the GA. Whilst the earlier draft of the text was quite strong, with language on women human rights defenders who transgress societal norms around gender and sexuality, as well as those who face backlash because of their work on these issues, the text has become watered down through negotiations with other governments.

14 States were elected as members of the Human Rights Council for 2014-2016 following votes at the GA on November 12th. Of those elected, Namibia, the former Yugoslav Republic of Macedonia and Viet Nam will be members for the first time. Re-elected for an additional term was Maldives, while Algeria, China, Cuba, France, Mexico, Morocco, Russian Federation, Saudi Arabia, South Africa and United Kingdom had served previous non-consecutive terms.

With South Africa now on the Council, it is hoped that this will strengthen their position in 2014 to bring a follow-up to their 2011 resolution on human rights, sexual orientation and gender identity, with the support of States from all regions. 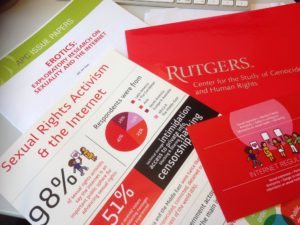 ARC Advocacy and Communications Manager Sheherezade Kara was pleased to be invited to an expert meeting on sexual rights, privacy and technology, hosted by the Association for Progressive Communications and the Centre for Genocide and Human Rights at Rutgers University, Newark from 8-10 November. Participants engaged in challenging discussions around issues such as social media and policy on hate speech, privacy and surveillance, and censorship and content regulation. It was also a valuable chance to share expertise and strategies with inspiring activists working on a wide range of relevant issues.

Read about APC’s Exploratory Research on Sexuality and ICTs (EROTICS)

Read 10 things to help defend yourself against surveillance 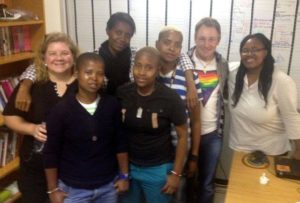 John and Kim with Iranti-org team

In November ARC was invited by Pan-African ILGA to join part of their meeting in South Africa to co-facilitate a session with ILGA on the development and history of SOGI issues at the UN, along with providing a progress report and contributing to a group discussion on the SOGI resolution.

While in Johannesburg, ARC was also happy in engage in a session of sharing and learning with the documentation team at Iranti-Org. Exciting opportunities for future collaboration were discussed… stay tuned!

The Envisioning Global LGBT Human Rights Project is moving forward in its 5-year plan. ARC’s partnership with Envisioning video and editing teams was critical in the production of our video documentary, “The Time Has Come”, which is available for download and screening in English, French and Spanish at www.vimeo.com/arcinternational. Kim continues to sit on the executive team and the Law and Human Rights Research Team. Envisioning also now has a public website available at: http://www.envisioninglgbt.blogspot.ca/

ARC was invited to participate in the Arcus Foundation’s Coordination Forum in October. The meeting brought together selected grantees of Arcus’ International Human Rights Program in order to foster collaboration and coordination among grantees, as well as provide feedback on Arcus’ monitoring and evaluation system. Kim led a session on UN advocacy and SOGI.

ARC is increasingly receiving requests to participate in both community and mainstream meetings, trainings and convenings, and recently took part in a conference on civil society expectations for the mechanisms of the HRC, organised by Friedrich-Ebert-Stiftung, Forum Human Rights, and German Institute for Human Rights. We also joined with human rights defenders from Nigeria and Senegal in delivering a presentation to journalists from Nigeria, Senegal and Chad, to be invited to present to Iranian NGOs on strategies for UN engagement, and to support the recent launch of the Yogyakarta Principles in Croatian.

ARC is currently in the process of recruiting a staff member to work on finance and admin. The role will be based in Canada, and will provide the ARC team with much needed support, meaning that we should be able to focus more of our energies on substantive work in the near future.

We have also been hiring project consultants to document and analyse SOGI related developments at the UN over the past ten years, as well as ARC’s own activities, with a view to assessing progress achieved, challenges remaining, and possible future developments. We are delighted to announce that this exciting project will be carried out by Dorottya Karsay from Hungary and Lucas Paoli from Brazil, guided by Jack Byrne from New Zealand. The project team will conduct interviews with many of our partner organisations, and SOGI list-members will have the opportunity to contribute through an online questionnaire. We are aiming to have a report available around the first or second quarter of 2014.

In December, Sheherezade will be engaging in an international strategy meeting on women’s rights and gender justice in the face of religious fundamentalisms, organised by AWID, Católicas por el derecho a decidir, Musawah, and Global Rights Watch. The aim of the meeting is to create a space to share diverse experiences and insights, inspire creative and effective strategies, discuss plans of action and formulate political actions to advance our collective advocacy on this issue.

Earlier this year, the South African Ambassador in Geneva announced their intention to host an African regional seminar on human rights, sexual orientation and gender identity, followed by a high level international conference in 2014, in order to lay the groundwork for a follow up resolution at the Human Rights Council. The African regional seminar is now expected to take place in January or February. We do not as of yet have further details about the high level meeting, but will provide information as it comes to light.