We have some fabulous developments to report in our summer edition of the ARC E-bulletin, as some massive steps have been taken in international recognition of human rights relating to sexual orientation and gender identity.

11TH SESSION OF THE UNIVERSAL PERIODIC REVIEW (May 2-13)

This session saw recommendations on human rights issues relating to sexual orientation and gender identity being raised in the reviews of Belgium, Palau, Seychelles, Solomon Islands, Latvia, Sierra Leone, Singapore, Suriname, Greece, Samoa, Saint Vincent and the Grenadines, Hungary and Papua New Guinea. Responses to the majority of these recommendations remain pending until reports are adopted at the 18th session of the Human Rights Council, taking place in September. Recommendations on issues specific to gender identity and expression (in the rare instances where they do appear) remain weaker than they could be, and have really highlighted the need for more targeted advocacy in future sessions.

As part of the lead up to the International Day Against Homophobia, the Office of the United Nations High Commissioner for Human Rights (OHCHR) released a video and a pamphlet on violence and discrimination targeting lesbian, gay, bisexual and transgender persons.

In the video, the High Commissioner Navanethem Pillay talks about recent violent attacks against LGBT people in the United States, Brazil, Honduras and South Africa, stressing that such incidents are not isolated but part of a global problem. “Ultimately, homophobia and transphobia are no different to sexism, misogyny, racism or xenophobia”, she notes “but whereas these last forms of prejudice are universally condemned by Governments, homophobia and transphobia are too often overlooked.” The full script is also provided on the OHCHR website as a Word document in English, French, Spanish and Arabic.

The pamphlet, entitled The United Nations Speaks Out: Tackling Discrimination on Grounds of Sexual Orientation and Gender Identity is a collaborative effort between OHCHR, UNDP, UNAIDS and WHO. It presents extracts from many of the strong statements on the subject made by the Secretary-General, the High Commissioner and other senior UN officials, as well as by the UN treaty bodies, special rapporteurs and other UN agencies.

By issuing the pamphlet jointly, the participating agencies/entities send a clear message that United Nations partners speaks together on the issue.

All of this information is posted on an OHCHR webpage dedicated to discrimination on the basis of sexual orientation and gender identity. See it here.

INTERNATIONAL DAY AGAINST HOMOPHOBIA (May 17)

ARC was proud to participate in events marking the International Day against Homophobia. ARC Co-Director John Fisher presented at a panel organised by UNAIDS, titled “IDAHO: Capitalising on recent developments on sexual orientation and gender identity for the June 2011 High Level Meeting on AIDS”, as well as at a gathering of UN-GLOBE: a network of GLBT employees of the United Nations.

Once again we were pleased to work with a great coalition of NGO colleagues from around the world to ensure the Human Rights Council addresses human rights violations based on sexual orientation and gender identity. This session’s reports presented by Special Rapporteurs documented a disturbing number of brutal abuses against LGBTI individuals in all regions of the world. In spite of these documented allegations, certain States insist that the Human Rights Council does not have the responsibility to protect on grounds of sexual orientation and gender identity. In a major victory at this session, however, a clear majority of the HRC member States voted to put the issue squarely on the Council’s agenda!

It was an epic journey from South Africa’s draft resolution L.27 on “The imperative need to respect the established procedures and practices of the United Nations General Assembly in the elaboration of new norms and standards and their subsequent integration into existing international human rights law” to resolution 17/19 on “Human rights, sexual orientation and gender identity”. The drastic change in the resolution’s title reflects the change in its language and focus. The original draft was worded so as to create an open ended inter-governmental working group to define and potentially limit how ‘new concepts’ such as sexual orientation fit into international human rights law. The draft, if it had passed, would have blocked consideration of the issues by any other UN forum or mechanism, effectively creating a censor.

Between March (when the original text was tabled and then deferred) and June, ARC International worked closely with activists in South Africa, Geneva and elsewhere to encourage the South African delegation to consider more positive language in the resolution, which focused on addressing violence, discrimination and related human rights violations on grounds of sexual orientation and gender identity.

Negotiations on the text went surprisingly smoothly, partly due to the absence of more hostile players, but particularly because of South Africa’s open and inclusive chairing style. NGOs were consistently given the opportunity to make interventions, and to provide suggestions on the text, and South Africa carefully considered all suggestions, by States and NGOs alike, to create a stronger resolution that could garner the maximum support.

The result was an excellent text which expressed “grave concern at acts of violence and discrimination, in all regions of the world, committed against individuals because of their sexual orientation and gender identity”. It requested the High Commissioner for Human Rights to prepare a study by the end of the year on discrimination and violence on these grounds, and decided to hold a panel discussion at the Human Rights Council in March 2012 to discuss the findings of the study. 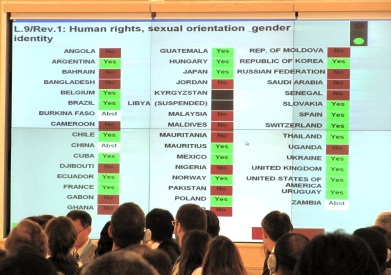 The resolution was considered for adoption on the last day of the Council session (June 17). Whilst diplomats hovered in tense groups around the back of the room, and NGO colleagues practiced deep breathing and shared packs of tissues (just in case), Ambassador Matjila of South Africa delivered a compelling and heartfelt statement to introduce the resolution, drawing a link to liberation struggles past and present. After various other statements, including supportive ones from Brazil and Mexico, and less pleasant ones from various other countries, the resolution was finally put to a vote and with much applause, cheers, hugs and tears, passed by 23 votes to 19 (with 3 abstentions)!

Resolution on violence against women

Whilst we celebrated the adoption of the SOGI resolution, we also mourned the loss of a reference to women vulnerable to “sexuality related violence” in the latest resolution on violence against women. Canada, the main sponsor of the resolution, kept the reference in until the last moment, but eventually removed it after strong opposition from some countries threatened the traditional consensus on the text. Although the reference was lost this time round, Canada did pledge to work to reinsert the reference next time the resolution arises for consideration.

NGO statements were delivered by ARC International (on Nauru), Blue Diamond Society (on Nepal), United & Strong Inc. (on Saint Lucia), Caribbean Forum for the Liberation of Genders and Sexualities (on Saint Kitts and Nevis), Global Action for Trans* Equality (on Austria), Australian Coalition for Equality (on Australia), and COC Netherlands (on Estonia).

ARC was pleased to co-sponsor a side event organised by ILGA titled “The Growing Consensus: Towards the End of Criminalization and Human Rights Violations based on Sexual Orientation and Gender Identity”, where NGO colleagues Phelisa Nkomo (Black Sash), Kenita Placide (United & Strong Inc.), Justus Eisfield (GATE), and Naome Ruzindana, (Horizon Community Association) all gave excellent presentations. The panel discussed the growing number of States willing to support SOGI initiatives at the UN, as well as the potential for the (then draft) resolution.

NAMING AND FRAMING, THE MAKING OF SEXUAL (IN)EQUALITY

On July 8th, ARC Co-Director, Kim Vance, co-presented at Naming and Framing, The Making of Sexual (In)Equality, the VIII Conference of the International Association for the Study of Sexuality, Culture and Society in Madrid, Spain. Her co-presenters, pictured here, were Mauro Cabral (GATE – Global Action for Trans* Equality), and Kenita Placide (United and Strong, Inc. – St. Lucia). The abstract was entitled “Lost Ground, Gained Ground and Fractured Ground: The literal fight for our lives at the UN”, and focused on the massive civil society effort, last December, to overturn the loss of the reference to sexual orientation in the UN resolution on extra-judicial killings, and an analysis of the exclusion of a reference to gender identity. 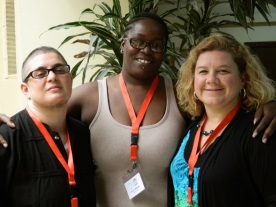 Because of recent advances at the UN since that initiative last December, the presentation also linked the advocacy around the EJE resolution to the recent victory around the UN Human Rights Council resolution in June that included references to both sexual orientation and gender identity. The presentation drew on documents collected during the initiative last December and follow-up data collected through a survey circulated on the SOGI listserv.

Also in Madrid, after surviving a week of Spanish school, ARC Co-Director John Fisher presented on Using UN Mechanisms to participants at the 1st Jornadas de Derechos Humanos, co-organised by the Spanish Federation FELGBT and Arcópoli.

ARC has also been engaging with a broad range of UN mechanisms as increased attention is paid to issues of sexual orientation and gender identity.  John Fisher participated in the Annual Meeting of UN Special Procedures, as well as the Annual Meeting of Chairs of UN Treaty Bodies, where the recent UN resolution on SOGI issues was highlighted in order to reinforce the crucial role of Special Procedures and treaty bodies in bringing attention to human rights violations on these grounds. John also spoke at the presentation by the High Commissioner for Human Rights of her annual report, which includes a dedicated section on sexual orientation and gender identity issues, and participated in a roundtable organised by the office of the UN High Commissioner for Refugees.

In other news, ARC was honoured to be invited to present at an experts’ meeting on caste-based discrimination, to discuss how successes, challenges and lessons learned in the struggle for SOGI equality might be harnessed by members of other marginalised groups seeking to advance human rights recognition in the UN. 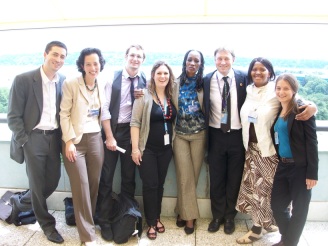 •           We’re lobbying at the ECOSOC committee later this month, where ILGA is being considered for accreditation;

•           We’ll be attending the Human Rights Council Advisory Committee session in August, to follow up on the latest HRC resolution on “traditional values”;

•           In October, the UPR Working Group will explore a broad range of sexual orientation and gender identity issues with States from all regions;