We’re pleased to present the second edition of the ARC International E-Bulletin, covering the first quarter of 2011. It’s been a hectic start to the year, as ARC has been participating in a number of conferences and events around the world, continuing to advocate for universal recognition of the human rights of LGBTI persons at the UN level, with some other new and exciting projects just getting started.

This session of the Universal Periodic Review session saw recommendations on SO/GI issues made to 13 out of 16 countries. We were particularly thrilled to hear both Nauru and São Tomé and Principe pledge to decriminalize same-sex relations. Nepal stated that it would ensure the Supreme Court decision regarding sexual orientation and gender identity would be implemented and Estonia agreed to combat discrimination and raise-awareness of SO/GI issues, but rejected recommendations on according equal rights to same-sex couples. Oman, Namibia and Mozambique all rejected recommendations to repeal laws criminalizing same-sex relations. Many recommendations remain pending, and the final Working Group reports will be adopted at the 17th session of the Human Rights Council coming up this June.

ARC Co-Director Kim Vance was delighted to take part in this conference in Pretoria from February 13-16, and presented a paper co-authored with lawyer/advocate Monica Mbaru, and Monica Tabengwa of LEGABIBO, entitled Human Rights and Traditional Values: exploring the intersections, challenges, and opportunities. The paper aims to ensure that research on sexuality, gender diversity, culture, and expression can inform and impact a rights-based discourse within national, regional and international human rights mechanisms. Over 80 people attended the conference with participants travelling from all over the continent. The conference also provided opportunity for a successful African launch of the Activist’s Guide to the Yogyakarta Principles, which was well-received by participants.

55TH SESSION OF THE COMMISSION ON THE STATUS OF WOMEN

In late February and early March, the UN in New York hosted the annual Commission on the Status of Women (CSW), which was attended by lesbian, bisexual and transgender activists from countries as diverse as Brazil, Indonesia, Namibia, Sri Lanka, St. Lucia, and Sweden.  Activists strategized with mission and UN staff to discuss strategy and planning for upcoming projects, including some focusing on HIV/AIDS, anti-discrimination and the development of the newly created UN Women. ARC International was pleased to convene the lesbian, bisexual and transgender caucus, and work with colleagues to spearhead a well-attended New York launch of the Activist’s Guide to the Yogyakarta Principles. ILGA and RFSL Sweden co-hosted an event on homophobia and education, and other side events focusing on feminist and women’s issues also integrated LGBT concerns throughout.

Official CSW negotiations were difficult, with a strong presence of the North American “right wing” working closely with conservative States to promote anti-feminist and anti-human rights positions.  States remained deadlocked through the meeting’s official concluding date, which forced an additional session to be added to allow for more negotiation time.  The CSW adopted Agreed Conclusions in mid March which, thanks to tireless efforts of sexual and reproductive health advocates, includes useful references to, among other things, State responsibility to provide sex education based on “full and accurate information”. You can read the conclusions of the CSW here.

Special thanks are due to Cynthia Rothschild, who coordinated ARC’s CSW participation. Given both the public education and coalition-building opportunities, it remains critical for activists working on issues of sexuality and gender to focus on the CSW each year.  Opposition to our agendas is omnipresent and well-organized, which makes strong NGO presence and programming even more essential.

The four week long March session of the Council was a marathon for all involved. We were excited to see a large and diverse group of LGBTI/women’s/sexual and reproductive rights activists converge in Geneva, and were able to spend some valuable time working together, and learning from one another. Here is a handful of the results:

Panel event – ARC was pleased to support the East and Horn of Africa Human Rights Defenders (EHAHRD) project and others to co-host a panel event on ending violence and criminal sanctions based on sexual orientation and gender identity. The combined messages sent out by panellists Kasha Jacqueline of Freedom and Roam Uganda, Manisha Dhakal of Blue Diamond Society, Nepal, Patrick Eba of UNAIDS and (ARC’s very own) John Fisher left no room for ambiguity on the extent of violence to which LGBT individuals around the world are subjected, the effects of criminal laws on the levels of violence and HIV/AIDS prevalence and treatment, and the responsibility of the Human Rights Council to step up its action in order to provide protection for the victims of human rights abuses and violations on these grounds, and hold perpetrators accountable.

High Commissioner addresses Council on SOGI Issues – Following presentation by High Commissioner Navi Pillay of her Annual Report, Adrian Jjuuko of the Human Rights Awareness and Promotion Forum, Uganda, delivered a powerful intervention stressing the challenges faced by LGBTI defenders in Uganda, and expressing support for the HC and her office in their work. In her response to the Council, the HC stated:

“I also particularly wish to thank civil society representatives who were very clear and precise on all the issues that we should continue to address. … I am alarmed, as we should all be, at the prevalence of violence and discrimination directed at lesbian, gay, bisexual and transgender persons—including targeted killings, torture, rape, beatings and criminal sanctions. These constitute serious violations of human rights. … Achieving equality in this area will require laws to be changed, certainly, but it will also involve a change in attitudes, a change in people’s hearts and minds. Our first priority will be to argue for the decriminalization of homosexuality in those countries where it is still subject to criminal sanctions. I recognize that in some countries public opinion strongly supports the prosecution of homosexuals and transgender persons. I understand the difficult position in which Governments in these countries find themselves. But the answer is not further persecution. It is public information, education and dialogue, and I commit to advancing the education function of this office.”

Joint statement on ending acts of violence and related human rights violations based on SO/GI – On Tuesday 22nd March, the Ambassador of Colombia, on behalf of a wide cross-regional group of 85 States, delivered a groundbreaking statement urging the Human Rights Council to address violations and end criminal sanctions on these grounds. This is the first time that a State initiative on SO/GI issues has received so much support from such a wide regional range of States, including some States that maintain criminal laws for same-sex relations.

Congratulations toeveryone who lobbied their government to sign up to this statement and now let’s make sure that governments stand up to their word in protecting everyone from violence!

Two statements in support of the joint statement were also delivered: the first by a group of 19 National Human Rights Institutions, and the second, read by ARC Co-Director Kim Vance, on behalf of a groupof 119 NGOs from over 60 countries.

Watch a video of the NGO statement at: http://tiny.cc/qbacp, see the text of the Joint Statement and list of signatories here, or read the joint NGO press release on the statement here.

Draft resolution on sexual orientation – Literally hours before the tabling deadline of the session, South Africa introduced an extremely troubling resolution which aimed to create an open ended inter-governmental working group to define and potentially limit how ‘new concepts’ such as sexual orientation fit into international human rights law, and which would have blocked consideration of the issues in any other UN forum. Thankfully, South Africa made an announcement (in the very last moments of the session) that they planned to defer consideration of the resolution until the June session of the Council, to provide more time for consultation on the text.

Traditional Values – The HRC unfortunately adopted its second resolution on “promoting human rights and fundamental freedoms through a better understanding of traditional values of humankind”, which noted the “important role of family, community, society and educational institutions in upholding and transmitting the traditional values of dignity, freedom and responsibility”. Whilst it was positive that a preambular paragraph was added to the resolution affirming that tradition could not be used to justify violations of human rights, it was disappointing to see many States that are supportive of LGBT rights vote in favour, after having heard ‘cultural’ and ‘traditional’ values being invoked throughout the session to justify curbing discussions on SO/GI issues. The resolution tasks the HRC Advisory Committee to look further into how traditional values can contribute to a better understanding of human rights. 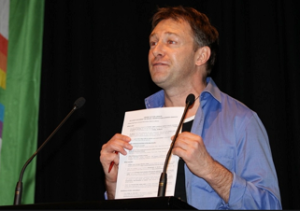 ARC Co-Director John Fisher was delighted to have the opportunity to participate in the 2nd Asia-Pacific Outgames Human Rights Conference, taking place in his home country New Zealand from March 15-18. A highlight was undoubtedly the Pacific and Asia Trans and Intersex Regional Hui, a full-day event which explored and celebrated the diversity of gender identities across the Asia-Pacific region.

John presented at a workshop on the Yogyakarta Principles, provided an overview of the Activist’s Guide in a forum including strong participation by national human rights institutions, and was honoured to deliver the closing address, reflecting on the many changes since New Zealand decriminalised homosexuality in 1986, and highlighting both positive developments and remaining challenges internationally and regionally. The more than300 Outgames Conference participants also adopted unanimously a motion endorsing the UN joint statement on Ending Violence and Related Human Rights Violations based on Sexual Orientation and Gender Identity, and calling on Governments throughout the Asia-Pacific region to do the same.

BUILDING GLOBAL DEMOCRACY: INCLUDING THE EXCLUDED IN GLOBAL POLITICS

In mid-April Kim was invited to be an author for this initiative, and will be working on documenting the work undertaken by global LGBTI communities for the Building Global Democracy project. 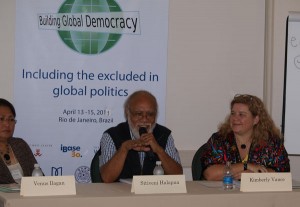 Whilst there has been significant involvement and advancement in international democratic processes, very little documentation and analysis of this work exists. The workshop entitled ‘Including the Excluded in Global Politics’ took place in Rio de Janeiro, Brazil, and “brought together leading academics, activists and officials from around the world to explore how marginalised groups can be empowered in global affairs”.

You can read more about this project here or watch a video of Kim’s presentation here.

In the last edition of the E-Bulletin we introduced the Envisioning project, led by Nancy Nicol of York University. Envisioning brings together community partners, documentary filmmakers and an interdisciplinary network of scholars to undertake a project of applied research, documentary film, skills exchange, capacity enhancement and knowledge mobilization, and has secured $1 million over five years from the Community-University Research Alliances (CURA) program of the Social Sciences and Humanities Research Council of Canada (SSHRC). ARC is proud to be a partner in this project, with co-director Kim Vance to be serving on the executive, and will be setting up a legal listserv to facilitate exchange across different regions. The project will be taking a critical perspective on the imposition of Western norms and definitions – including the use of terms such as ‘LGBT’ – which do not necessarily describe the diversity of sexual and gender expressions/orientations/experiences. •           We will soon be announcing the publication of the French version of the Activist’s Guide to the Yogyakarta Principles;

•           In May, the UPR Working Group will explore a broad range of sexual orientation and gender identity issues with States from all regions, and ARC has been busy preparing, in partnership with national NGOs, supporting documents for States to raise SOGI issues;

•           ARC will continue to engage in international advocacy at the 17th session of the Human Rights Council, which takes place from 30th May to 17th June, and which may bring a resolution on sexual orientation and gender identity.