Guatemalan writer Augusto Monterroso was the author of what is often credited to be one of the world’s shortest stories, “El Dinosaurio” (“The Dinosaur”). In fact, the story states: “Upon awakening, the dinosaur was still there.”

Regarding what is happening throughout Latin America, we could paraphrase Monterroso’s polysemic story, and say: “Upon awakening, gender ideology was already here”.

There are many hypotheses to answer or reasons on why the fight against what conservative/religious people call “gender ideology” has established itself in Latin America. But the reality is that this wave has arrived and established in our countries, and in many ways things are not going well for LBTI and women.

Under authoritarian/religious governments and/or “fighters against gender ideology” many women and LBT persons are forced to work in the informal market, they suffer from discrimination at health care, many of them are rejected from formal education, and even killed because of their work as human rights defenders. Girls and teenagers are denied the possibility of receiving comprehensive sexuality education. Women and LBT persons also face obstacles in their access to contraception, to sexual and reproductive health, to hormone therapies, etc.

In his latest Report, the Independent Expert on protection against violence and discrimination based on sexual orientation and gender identity took into consideration the “gender ideology” issue and noted…

… the emergence in certain regions of the world of a populistic discourse that seeks to delegitimize the plight of persons discriminated against on the basis of sexual orientation or gender identity through an attempt to rebrand the term “gender ideology”. In its original sense, the term […] refers precisely to the binary system of preconceptions and predetermined gender-based power asymmetries that must be challenged if all humankind is to fully enjoy human rights.  [1]

In the same line, specialist in feminist and queer studies Teresa de Lauretis says that Gender has the function of constituting concrete individuals as men and women. In that process is precisely where you can see the gender relationship with ideology and see it also as an effect of gender ideology.[2] Due to ideology, people are built according to certain genders that are also related to class, race, sexual characteristics, etc.

Nevertheless, some conservative and religious groups are trying to impose a different concept of what gender ideology is. They say, and disseminate, that it is a LGBT- and feminist-led movement that tends to destroy the traditional family and the natural order of society, and that it is against science and biology. In the name of their fight against gender ideology, these conservatives justify violence and discrimination against women and LGBT people.

I cannot help but agree with Independent Expert on SOGI when he says that “The notion that there is a gender norm, from which certain gender identities “vary” or “depart” is based on a series of preconceptions that must be challenged if all humankind is to enjoy human rights. Those misconceptions include: that human nature is to be classified with reference to a male/female binary system on the basis of the sex assigned at birth; and that it is a legitimate societal objective that, as a result, persons adopt the roles, feelings, forms of expression and behaviours that are considered inherently “masculine” or “feminine”.” [3]

So, what gender ideology means has nothing to do with what anti-rights group are fostering. It is not a matter of women’s liberation or LGBT human rights -I wish it were- but a system that tries to strengthen some bodies and identities to the detriment of many others.

Following the false concept of gender ideology, decision makers in many Latin American countries have been working to reverse public policies that support LBTI and women’s access to public services.

Brazil’s new Ministry of Women, Family, and Human Rights decided not to attend to LGBT issues any more.  Brazil’s minister of Education shut down a section of the ministry devoted to diversity and human rights.

In 2011, religious congressmen succeeded in their lobby to stop the distribution of a package of educational videos produced by the national program “School without homophobia” created in 2004. In 2014, conservative congress members edited the Brazilian National Plan of Education and removed the clause that stated that one of the goals of the public educational system is “to overtake educational inequalities, with emphasis on the promotion of racial, regional, gender and sexual orientation equality.” [4]

Brazil is not the only country where LGBT rights are under threat. A strong alliance between fundamentalist factions of Catholic and Evangelical churches are influencing public policies and laws throughout the region, based on what they consider is a “dangerous” thing: to allow people to self-identify with whatever gender they feel, and to teach children about SOGI issues.

The Paraguayan government has forbidden teaching “gender ideology” at schools. The prohibition is based on the protection of “the” family as the one built only by a man and a woman. Something similar happened in Peru, where the campaign #ConMisHijosNoTeMetas (don’t mess up with my children) succeeded in its goal to withdraw concepts such as gender identity or gender construction from basic school curricula.

In Bolivia, after the 2017 gender identity law, conservative and religious sectors began creating obstacles to the law’s implementation. “In November 2017, the Constitutional Plurinational Court decided that a paragraph of the Identity Law was unconstitutional, thus, prohibited marriages and adoptions of people that had chosen to modify their gender identities. [5]

Chile has progressed LGBT rights. Some public policies in health and education implemented a few years ago tend to guarantee inclusion of LGBT persons in public services. Nevertheless, access to education or to health services are constantly being obstructed by conservative groups. Despite the fact that education is not “blocked” for LGBT people, not every school will accept these persons or can guarantee their insertion in that school community. The same happens with health: it is still pending to educate public workers in the care of trans people.[6]

In Colombia, due to violence and discrimination LBT persons experience barriers in their access and permanence in formal education.[7] This situation impacts on their school careers and their life projects. There are some cases of trans kids who don’t have access to some schools or are obliged to wear uniforms or use bathrooms that not fit or match the gender they are identified with.  More data on Colombia shows that trans identities are pathologized in their access to health. Those who need medical treatments or surgeries to modify their bodies must end up in clandestine places to have what they are looking for, thus putting their lives are at risk.

In Argentina, despite having a gender identity law, only during the first three months of 2019, 36 trans and transvestite women were assassinated, a 15 year-old girl died because of an unsafe abortion, and at least two 11 year old girls were denied the right to a legal abortion in public hospitals after they were raped and became pregnant.[8] Despite their ages, both girls underwent c-sections because doctors in public hospitals delayed or denied them attention waiting for the pregnancies to advance week through week.

Countries from Central America are not the exception. A lot of discrimination against LGBTIQ is also a common practice in Guatemala, Honduras, El Salvador and Nicaragua in terms of access to work, education, health and justice. [9]

Only Costa Rica and Panama have decent conditions in terms of physical facilities for health services related to HIV / AIDS, but both countries still need health workers to stop discrimination and stigmatization of LGBTIQ. In Panama, fundamentalists made joint statements rejecting the Advisory Opinion of the Inter American Court of Human Rights about gender identity and same-sex marriage.[10]

Given these examples, more than against what conservative groups call “gender ideology”, what we should fight against is biology as a destiny. We should fight against the ideology that tries to impose on us a unique way of how a person must act, love, and dress. And to do so, we must guarantee every person, particularly LBTI and women all their human rights.

This year, CSW is discussing “Social protection systems, access to public services and sustainable infrastructure for gender equality and the empowerment of women and girls”. None of these goals will be achieved if LBTI people continue to be discriminated against and excluded. States are failing to fulfill their obligations.

In its Report on CSW63 priority theme, the Expert Group pointed out that “in the global north and south, east and west, patriarchal, anti-liberal sentiments are gaining a steely grip on state governments that trend towards authoritarianism. The result is a crackdown on rights […] Of particular concern is an anti-gender ideology that seeks to strip away the hard-earned progress that feminists have made in extending equal opportunities to women, and celebrating differences in human identity and expression.”[11]

Given this reality, LBTI rights should not be the bargain chip of CSW’s Agreed Conclusions. Not any more. 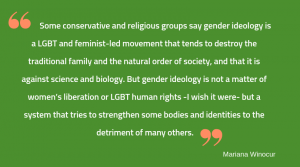 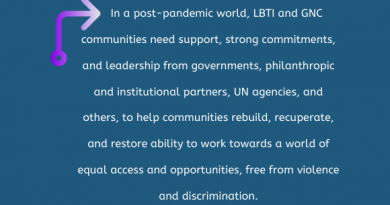 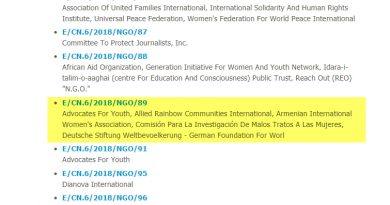