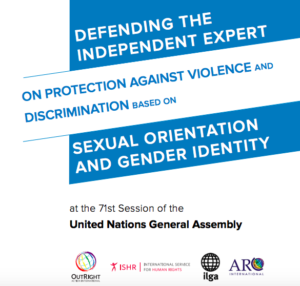 The following report provides an account of the successful defense of the Independent Expert on Protection Against Violence and Discrimination Based on SOGI (IE SOGI) mandate at the UNGA over the course of the 71st Session from October to December 2016. The process of defending the establishment of the IE SOGI by the Human Rights Council at the United Nations General Assembly (UNGA) ultimately resulted in six separate votes on resolutions and resolution amendments, across two main General Assembly Committees and UNGA Plenary sessions.

The aim of this report is to offer insight into the dynamics of debates on SOGIESC (sexual orientation, gender identity and expression, and sex characteristics) and human rights at the UNGA by providing an analysis of the voting records of UN Member States, transcripts of the debates that surrounded each vote and a snapshot of the pivotal role of civil society advocacy throughout the process.