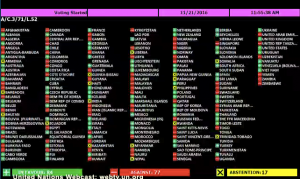 21 November 2016 (New York) — The United Nations mandate of the Independent Expert on sexual orientation and gender identity (SOGI) has been safeguarded despite hostile contestation at the 71st Session of the 3rd Committee of the United Nations General Assembly (UNGA) in New York City.

LGBTIQ activists and organizations around the world quickly mobilized to voice their concerns on the implications of the hostile resolution to national governments as well as at the United Nations headquarters in New York. A joint statement endorsed by 850 organizations from 157 countries around the world, highlighted the need for states to respect the authority of the Human Rights Council and to vote in favour of upholding the SOGI Independent Expert mandate.

“A lot can be accomplished when forces join hands. We are encouraged by this voting result and in the confirmation that States believe in the mechanisms of the Human Rights Council. It is vital that the integrity of the Human Rights Council remains intact and is not further undermined in the Third Committee,” stated Jessica Stern, Executive Director, OutRight Action International.

The SOGI Independent Expert position on the “Protection against violence and discrimination based on sexual orientation, and gender identity (SOGI),” was mandated by the passing of a historic resolution A/HRC/RES/32/2 on June 30 of this year, and is held by Vitit Muntarbhorn, a human rights expert from Thailand. A campaign of 628 nongovernmental organizations from 151 countries advocated for the adoption of the resolution and for the establishment of the position.

In early November, Botswana, on behalf of the African Group, presented a hostile resolution on the Human Rights Council Annual Report, specifically targeting the SOGI Independent Expert Mandate. The resolution contested the legality of the creation of the mandate, essentially arguing that SOGI are not universally recognized as human rights and are not codified in international law. The resolution called for an indefinite postponement of the mandate until consensus could be reached on the definition of SOGI and the legal basis to which the mandate was created, the African Group statement read,

“We are alarmed that the Council is delving into matters which fall essentially within the domestic jurisdiction of States counter to the commitment in the United Nations Charter to respect the sovereignty of States and the principle of non-intervention. More importantly, it arises owing to the ominous usage of the two notions: sexual orientation and gender identity. We wish to state that those two notions are not and should not be linked to existing international human rights instruments.”

“We are deeply disappointed that Botswana led this fallacious move by the Africa Group to remove gains at the HRC to include SOGI protections within the existing human rights framework. Let us remind everyone that the SOGI mandate is about real people and their right to secure lives, to be free of violence and discrimination and that these lives can’t be postponed or deferred indefinitely. We deserve more from our governments”

The SOGI Independent Expert was created after adoption of a resolution in the Human Rights Council in June 2016, initiated by seven Latin American countries, Argentina, Brazil, Chile, Colombia, Costa Rica, Mexico and Uruguay. They, plus El Salvador (LAC 8), countered the African Group’s attempt to postpone the mandate by introducing an amendment to the resolution deleting the hostile paragraph.

An explanatory note provided by the eight Latin American countries on their submitted amendment in support of preserving the SOGI mandate and the integrity of the HRC reads,

“The seriousness of the consequences (…) lies in the fact that never before has a country or group of countries attempted to challenge a special procedures mandate by the Human Rights Council with an appointed and fully functioning mandate holder. (…) If the General Assembly reopens the Council’s annual report and use a selective approach to which resolution it seeks to block or defer indefinitely it would fundamentally undermine the authority granted to the Council by the General Assembly, thus having far reaching implications well beyond the specific resolution under consideration.”

LGBTIQ civil society in the Asia and the Pacific region have vocalized their support for the SOGI Independent Expert, hoping that a representative from the region would help progress protections for people of diverse sexual orientation and gender identity. In response to the voting, Ryan Silverio, Regional Coordinator for the ASEAN SOGIE Caucus said,

“Today we are reminded of the fundamental mission of the Council, and the UN’s commitment to promote human rights and equality for all. We are encouraged by the open dialogue with ASEAN member states in the lead up of the vote, and are particularly thankful to Thailand for showing leadership to protecting this mandate,”

The failure of the proposed hostile resolution is significant not only because it reinstates the authority of the Human Rights Council, but it also allows forward movement on the work of the SOGI Independent Expert- a crucial stride in the UN’s commitment towards protecting the universality of human rights, especially for vulnerable communities. It reinforces the notion that people cannot be left behind and states must protect all people from discrimination and violence based on their SOGI.

“The SOGI Independent Expert position is vital in bringing to light the horrific acts of violence and discrimination many people face because of their sexual orientation or gender identity. These abuses happen everywhere; no region or country is immune to them. Having concrete documentation showing the consequences of homophobia and transphobia on the lives of people and recommendations on how to address these challenges from an HRC Special Procedure mandate holder will help states take responsibility to protect LGBTQI persons. It will be much harder to ignore the facts,” commented Micah Grzywnowicz, trans activist and international advocacy advisor at RFSL, the Swedish Federation for LGBTQ Rights.

While the hostile resolution did not pass today, civil society has warned that future attempts to stop the progress of the SOGI Independent Expert are not out of the question.

The Expert will be tasked with assessing implementation of existing international human rights law, identifying best practices and gaps, raising awareness of violence and discrimination based on sexual orientation and gender identity, engaging in dialogue and consultation with States and other stakeholders, and facilitating provision of advisory services, technical assistance, capacity-building and cooperation to help address violence and discrimination on these grounds.

“As always, the fight continues to ensure that States don’t cherry pick which human rights to protect. We must continue to be vigilant and to mobilize to ensure that universality and non-discrimination triumphs at all levels. We must also ensure that we are working together to create change which will benefit all LGBTIQ people. Safeguarding human rights principles remains prime to peace and security for all people everywhere, anytime,” said Steve Letsike, Director of Access Chapter 2, a South African LGBTIQ human rights organization. 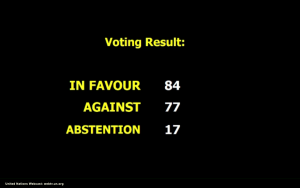