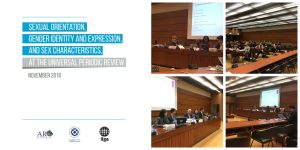 At a joint side event at the United Nations headquarters in Geneva, ARC International, the International Bar Association’s Human Rights Institute (IBAHRI) and the International Lesbian, Gay, Bisexual, Trans and Intersex Association (ILGA) launched their joint report on Sexual Orientation, Gender Identity and Expression, and Sex Characteristics at the Universal Periodic Review. The report highlights the successes of the Universal Periodic Review (UPR) in its first two cycles and addresses the challenges in turning the UPR into a greater mechanism to protect the rights of lesbian, gay, bisexual, trans and intersex (LGBTI) persons on the ground.

The UPR has been one of the most progressive vehicles for the protection of the rights of LGBTI persons all over the world. First, because it periodically reviews the human rights records of all UN states irrespective of which UN treaties they are parties to. Second, the review is universal and extends to a wide array of human rights, including the rights of LGBTI persons.  Third, civil society participation in the UPR is relatively easy, making it an accessible space to human rights defenders.

“Right from the outset of the creation of this mechanism eight years ago, we saw that its universal nature and uniquely accessible process could enable a new and unprecedented level of engagement with these issues within UN spaces,” said Kim Vance, Executive Director of ARC International. “This report affirms that observation and validates the investment that so many stakeholders have made.”

Some key findings of the report include the following:

The authoring organizations welcome these positive developments, but noted some gaps and challenges:

Nada Chaiyajit, trans intersex human rights defender, panelist of the launch and the LGBTI representative of the Thai CSO Coalition for the UPR, noted: “The UPR should be democratic and inclusive process with comprehensive human rights scenarios on the ground to shape the SMART[2] recommendations on SOGIESC issues”. 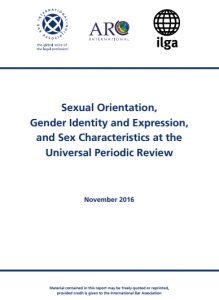