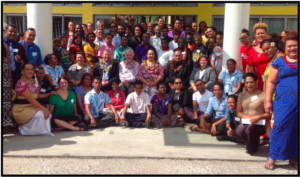 LGBTQI organised groups convened for the Pacific LGBTQI Human Rights Conference in in Nuku’alofa, Tonga, in May, 2015. Co-organized by the Pacific Sexual Diversity Network (PSDN), Diverse Voices for Action and Equality (DIVA) and ARC International (ARC), the conference was hosted by the Tonga Leiti Association (TLA) in Nuku’alofa, Tonga. The conference proved vital in connecting groups from across the Pacific region and educating activists on international human rights law, recent international developments and agreed principles such as the Yogyakarta Principles. Read the full report of the conference here: “Our Voices, our Communities, our Rights: Advancing Human Rights related to Sexual Orientation, Gender Identity & Expression in the Pacific”.

Communications Officer Maria Fontenelle was part of a three person team of Envisioning researchers to present at the Conference of the Women’s and gender studies et recherches feministes (WGSRF) in Ottawa at the end of May, 2015. The panel on LGBT Human Rights in the Caribbean constituted part of the Congress of the Humanities and Social Sciences 2015, Women and Gender Studies. Fontenelle’s “Compliance and Resistance: Fruits of Criminalisation” examined the comparative safety and visibility of LGBT Saint Lucians with increasing and open advocacy for the full recognition of their human rights.

Exploring “Paragraph 96 and beyond” at CSW59

On March 10, over fifty (50) people from all over the globe attended a panel at the UN Commission on the Status of Women, sponsored by ARC, ILGA  and COC Nederland. Panelists offered historical accounts and research examining the impact of the Beijing Platform for Action within various UN fora, and on the lived realities of LBTI people across the globe.

Also contributing to the panel were Gloria Careaga Pérez of Fundación Arcoiris, Mexico, Mikee Nunez-Inton of the Society of Transsexual Women of the Philippines, and Monica Tabengwa of Pan Africa ILGA, Botswana.