ARC co-organized the side event Ending violence against LGBT people? Addressing the protection gaps in the un system, during the 32nd session of the Human Rights Council.

During our HRC32 side event Ending violence against LGBT people? Addressing the protection gaps in the un system, panelists spoke about endemic violence and hatred against LGBTI people worldwide. They addressed the brutal killings at Orlando as a reminder of the deep and pervasive violations of rights which LGBT communities around the world face.

This slide presentation captures the moving tribute to the victims of the Orlando shooting in a  gay club which was paid by LGBT communities in the global south.

While the media covered the global response to the tragedy, it did not highlight the fact that in cities of the global south right from Chandigarh, Nellore, Delhi in India to Kampala, Nairobi, Rabat and Tunis in Africa from Mexico city and Bogota in Latin America to Suva, Tonga in the Pacific and  Seoul and Bangkok in Asia, LGBT communities responded with spontaneous grief and solidarity.

The question to ask is why did the suffering of the victims of Orlando resonate so powerfully with LGBT communities in the global south? The reason LGBT communities from towns like Nellore in India and big cities like Rabat and Tunis felt so passionately is because the pain of  being targeted for who one was was something they spontaneously  understood.  The sting of discrimination and the  pain of violence, simply for being themselves was a part of the experience of being LGBT  in the global south. The empathy for the victims of Orlando came out of the experience of knowing what it is to be targeted simply for being yourself.

The slide presentation contains images which are taken from social media as well as global media. We thanks all those concerned for the images which we have shared here. 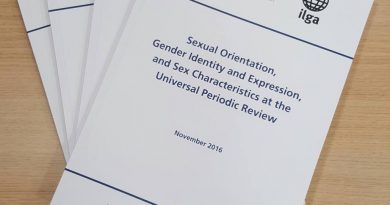