While we had been looking forward to a less intensive period following the tumultuous Council session in June, in the end we have had plenty of projects in recent months to keep us occupied and out of trouble! 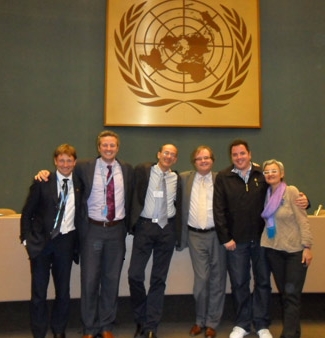 In July, ARC International was pleased to support ILGA in its application for UN ECOSOC accreditation. The NGO Committee had previously recommended that ILGA’s application be rejected, after a long consideration process. The Committee has now rejected more than 10 applications by NGOs working on sexual orientation and gender identity issues. In each of 2006, 2007, 2008, 2009 and 2010, the ECOSOC has had to overturn these recommendations in order to uphold the principle of non-discrimination underpinning the UN Charter. And again, on 25 July 2011, ECOSOC rejected the NGO Committee recommendation and granted consultative status to ILGA with 29 votes in favour, 14 against and 5 abstentions – the strongest margin of victory yet and the first time an ECOSOC vote to accredit an LGBT NGO has been adopted by a clear majority. Congratulations ILGA! ARC was also asked informally when we would be applying for ECOSOC status ourselves – so it may be time to brace ourselves for our own battle to come! Read ILGA’s press release here.

The Human Rights Council Advisory Committee considered its new mandate to produce a study looking at the intersections between traditional values and human rights. ARC participated in the Committee meeting, and worked with other NGOs to make both written and oral submissions. The Committee formed a drafting group of 10 members from all regions. They expect to have a draft of the report by the next session, which is due to take place from 20-24 February 2012.

The 18th session of the Human Rights Council took place from the 12th to 30th September 2011, and was a comparatively quiet session for ARC. After the wonderful achievements of the 16th and 17th sessions, with the joint statement of 85 States, and the SOGI resolution respectively, we thought it best to keep a low profile and avoid rubbing salt in the wounds of certain States, focusing instead on behind-the-scenes outreach, follow-up and preparations for release of the OHCHR report and SOGI panel next year. 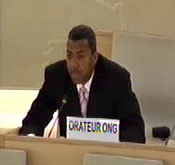 We were also busy supporting NGO participation in the UPR and as usual the Council adopted a number of UPR reports. Highlights included:

The October 2011 session marked the end of the first cycle of the Universal Periodic Review, meaning that all UN Member States have now undergone a peer review on their human rights situation. Around 20,000 recommendations have been made through this mechanism over the past four years, with a 100 per cent attendance rate from State parties. The next sessions and cycles will build on this foundation, by reviewing the implementation of accepted recommendations, as well as paying attention to new developments and other human rights issues of concern. Meanwhile, highlights from the October session include: 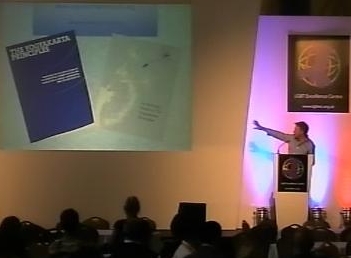 ARC Co-Director John Fisher was pleased to be invited to deliver a keynote address at the first International LGBT Human Rights Summit, in Cardiff, Wales on 31 August. The conference was well-attended by activists from around the UK and international guests, and served as a useful opportunity to highlight the Yogyakarta Principles and Activist’s Guide, as well as recent developments at the UN. You can watch a video of John’s presentation, as well as others, at http://lgbtec.org.uk/page/watch-live. Watch out for the Yogyakarta Principles in Welsh!

ARC provided a half-day in-house training on LGBT rights for staff members of the International Service for Human Rights in early September. Feedback from ISHR staff was very positive, with a number looking forward to a potential round 2. We also delivered a presentation and training to participants in the ISHR French Human Rights Defenders Program, involving francophone activists working on a broad range of human rights issues in regions around the world.

Including the Excluded: Case Studies

The Building Global Democracies team announced the online publication of the “Including the Excluded in Global Politics” case study summaries. Read the summaries, including Kim’s piece on sexual and gender minorities, here.

John Fisher was invited to present the opening keynote address at the Assises genevoises contre l’homophobie, a follow-up conference to measure progress and discuss challenges in Switzerland since the first such initiative in 2009. As host to many of the United Nations human rights mechanisms, Switzerland has a particular responsibility to lead by example, and the forum served as an opportunity to highlight a number of areas in which further work is needed. 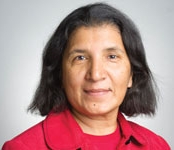 On October 12, 2011, the UN Special Rapporteur on violence against women, its causes and consequences, Rashida Manjoo, convened a day-long expert group meeting in New York on gender-motivated killings of women. The purpose of the meeting was to examine the manifestations, causes and consequences of gender-motivated killings in preparation for a report to the UN Human Rights Council in Geneva in June 2012. ARC International was honoured to participate in this group meeting. Kim Vance prepared and presented a research paper, intended to provide a somewhat brief and current overview of the global situation of gender-motivated killings of women on the basis of sexual orientation and gender identity. There is also an accompanying 30-minute powerpoint presentation. ARC would welcome opportunities to present this research in other fora, if needed. The paper will be published on our website in due course.

In other exciting news, ARC’s proposal, “Highlighting the InterSEXions: Sexuality, Economy and LGBT Rights” has been accepted for the 2012 AWID Forum: Transforming Economic Power to Advance Women’s Rights and Justice. The interactive panel, moderated by ARC co-director Kim Vance, will be held in Istanbul in April next year.

More information can be found on the Forum website. 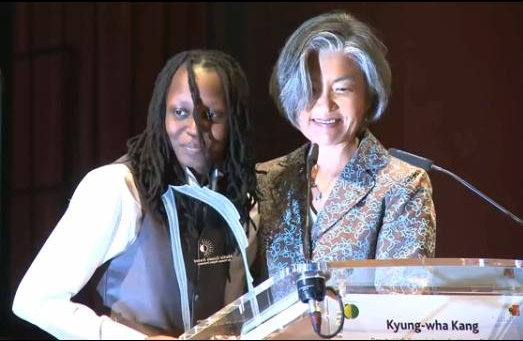 We were proud to attend the ceremony of the Martin Ennals Award for Human Rights Defenders on October 13th at the luxurious Victoria Hall in Geneva. The laureate this year is of course Kasha Jacqueline, the executive director of Freedom and Roam Uganda, and indomitable advocate for the human rights of LGBT persons. During the ceremony, the Deputy UN High Commissioner for Human Rights and the Mayor of Geneva both made statements congratulating Kasha on her work.

More on the MEA can be found here.

The 50th session of the Committee on the Elimination of Discrimination against Women took place from the 3rd to the 21st October 2011. ARC was happy to attend NGO lunch briefings organised by IWRAW Asia Pacific and Committee sessions on the eight countries under consideration: Chad, Côte d’Ivoire, Kuwait, Lesotho, Mauritius, Montenegro, Oman and Paraguay. In its Concluding Observations, the committee commended Montenegro for having implemented a law prohibiting discrimination based on sex, sexual orientation, gender identity and other grounds in 2010. Among other things, the Committee also voiced concern over the lack of comprehensive laws in Paraguay to protect the equality of disadvantaged groups of women, including lesbian and transsexual women.

The Human Rights Committee convened for its 103rd session for three weeks from the 17th October 2011 to consider the reports on Jamaica, Kuwait, Norway and Iran, as well as the country situation of Malawi in the absence of a report. All Committee sessions were made available as live webcast by the Centre for Civil and Political Rights. A number of NGOs working on SOGI issues had submitted shadow reports, and the involvement of IGLHRC and several national NGOs during the session helped ensure that the Committee gave vigorous attention to issues relating to sexual orientation and gender identity. The Committee’s Concluding Observations will be made available shortly here.

During the review of Jamaica, Committee members expressed concern about a range of issues, including the criminalisation of same-sex conduct and violence against LGBT persons, and it highlighted the need for better access to HIV prevention and treatment for LGBT people, training of the police, and systematic punishment for SOGI-related acts of discrimination and violence. In response to Iran’s refusal to provide information on issues relating to sexual orientation and gender identity in its report, the Committee stated repeatedly that SOGI issues are in fact within the mandate of the Covenant. The Committee also asked to receive information on, among others things, the continued use of the death penalty and forced sex reassignment surgery. In the review of Kuwait, the Committee expressed concern at the criminalisation of same-sex conduct, as well as prosecutions brought forward against LGBT people, and asked whether any investigations into harassment and maltreatment of LGBT people are being undertaken.

Kim continues to work on the Executive of the Envisioning Global LGBT Human Rights Project. As part of the Legal and Human Rights Mechanisms Committee, she is currently co-supervising two law students at the University of Toronto who are addressing the topic of how international treaty bodies and human rights mechanisms interact with LGBT human rights initiatives. The students will be producing 10 country-specific memos that track state interactions with the United Nations regarding LGBT rights, with the focus being on Canada, South Africa, India, Botswana, Kenya, Uganda, St. Lucia, Guyana, Jamaica, and Belize.

UN Human Rights Council resolution 17/19 (June 2011) requested the High Commissioner for Human Rights to prepare a study “documenting discriminatory laws and practices and acts of violence against individuals based on their sexual orientation and gender identity, in all regions of the world, and how international human rights law can be used to end violence and related human rights violations based on sexual orientation and gender identity”. The study is due to be released in later December/ early January.

In September the OHCHR and the lead sponsor, South Africa, organized a briefing at the UN in Geneva to provide updates on the implementation of the resolution.
The new South African Ambassador stressed that the goal of the report was to provide a detailed study that did not take a naming-and-shaming approach, but instead focused on violence and non-discrimination. It was South Africa’s aim to depoliticize the topic in order to be able to engage in constructive dialogue, to build a broad support base and to make long-term progress instead of applying a “quick fix” that could lead to further polarization.
Charles Radcliffe (OHCHR) stated that the report was an opportunity to use evidence-based research to initiate a factual discussion. In light of time and length constraints, the report would not be an encyclopaedic country-by-country discussion, but would instead set out the relevant legal principles and obligations of States. The report would contain three main sections on violence, discriminatory laws and discriminatory practices, as well as a section on good practice; and it would conclude with recommendations to States and the Human Rights Council.

By highlighting the gross violations of human rights, and providing recommendations to member States, we are sure that this report will prove to be an extremely valuable tool in our global struggle towards ending violence and discrimination.

The deadline for the next round of UPR submissions is:

As always, it is important that human rights issues relating to sexual orientation and gender identity be included. Submissions can be as short as an e-mail of a few paragraphs, and a maximum of 5 pages, and should be sent to uprsubmissions@ohchr.org, with a copy to arc@arc-international.net. More information, including ARC’s Guide to the UPR, can be found on our website.

ARC International, United and Strong, Inc. (St. Lucia) and the Envisioning LGBT Human Rights Project are pleased to announce an International Dialogue on LGBT Human Rights: Focus on Strengthening the Caribbean Response and Linking Regional and International Advocacy around the world. The Dialogue will take place next year in St. Lucia. A call for applications has been sent out via the sogi-list.

We’re pleased to welcome Katrin Keuzenkamp, who is joining ARC for a three-month placement in Geneva. Katrin will be assisting us in creating a short guide to the treaty bodies, analysing how the Activist’s Guide to the Yogyakarta Principles is being utilised around the world, and in the development of a massive project on the UPR for our website. We’d also like to thank Ananita Varughese who interned with ARC in July and helped to kick-start this project.