Once more we reach out to tell you what we have been working on in the last few months. We were very busy in advocating with a strong network of organizations to achieve the renewal of the mandate of the Independent Expert on SOGI. We have also been delivering statements, participating in conferences and conducting training and research. Leading toward December, we are working hard on our next International Dialogue, to be held in Delhi, India.

HRC41 – The renewal of the IESOGI mandate

The 41st HRC session was an extremely important one due to the mandate renewal of the Independent Expert on protection against violence and discrimination based on sexual orientation and gender identity. With 27 in favour, 12 against and 7 abstentions, the HRC adopted a resolution to renew the mandate of the Independent Expert. (see press release)

ARC worked intensely to achieve this renewal. We participated in numerous regional and international calls to develop strategies for the action, generated an analysis piece on the success of the mandate to-date, and were one of the 1312 organizations from 174 countries that signed a global statement urging the HRC to renew the mandate. 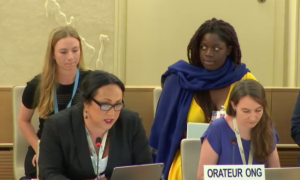 ARC’s Arvind Narrain was present in Geneva for the Council session, featured in a promotional video message supporting the mandate, and delivered a statement on behalf of African organizations. We also accredited other NGOs to attend the Council session. 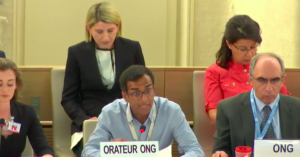 There were some other strategic actions to achieve the renewal. One of those was a joint NHRI statement to support the renewal of the SOGI mandate. Another one was a statement on human rights defenders, focusing on LGBTI rights defenders and those working on gender and SRHR issues.

ARC’s Kim Vance-Mubanga was present in Cape Town, South Africa for the first ever Global LBQ Women’s Conference in July. She was a member of the Advisory Committee leading into the conference and participated in a number of conference sessions along with conducting on-site interviews related to the intersectionality research discussed in our last e-bulletin.

Earlier in the year, ARC initiated a discussion on its global SOGI listserv about how to infuse a stronger SOGI lens into the Women Deliver conference in Canada (June). A dedicated group of global activists, including many youth leaders, and 2SLGBT group Egale Canada, began planning and strategizing about how to effectively use the platform that this huge conference offered.  The result was an amazing Pride Booth (voted best in the conference), dynamic talks and panels, networking events and an opportunity to reach an audience often not reached in other spaces. ARC’s Kim Vance-Mubanga attended the conference and was also invited to speak on a Canadian government panel on intersectional work between the women’s movement and LGBTI movements.

We have updated our section on UPR submissions and recommendations related to SOGIESC. While we are still working to update the latest reviews, all the information up to the 30th session is available here.
You will find information on references to sexual orientation, gender identity and expression, sex characteristics in the Universal Periodic Review documents, as well as references and recommendations made during the Review Working Group sessions, and State responses to these recommendations.

ARC’s ED, Kim Vance-Mubanga has been invited by the Canadian LGBT Purge fund to be part of the Monument Advisory Committee. The committee, along with a small group of subject-matter experts, design professionals and LGBT Purge survivors will shape the vision for a new national monument.  The monument will memorialize the historic discrimination against LGBTQ2+ Canadians, including the LGBT Purge. It will capture the tragedy, victory, celebration, and journey of the Canadian LGBTQ2+ community.

We are working intensely toward our International Dialogue in Delhi, India.  Activists and scholars around the world will meet in December 9-12 to discuss and share experiences on the Dialogue’s subjetct: “Rising Through the Challenge: documenting and analysing best practices for advancing human rights related to sexual orientation, gender identity or expression and sex characteristics (SOGIESC) using the tools of international law, domestic litigation, and apology/reparation.”
We have closed the call for submissions process and are calling for general registration. Stay tuned, more information and good news are coming!

ARC’s Kim Vance-Mubanga will be attending and presenting a workshop during the upcoming CWSDC in Jamaica in October 2019.

ARC has completed the final draft of a good practice guide based on stories and lived experiences of how diverse movements (LGBT and women’s) can converge together around common agendas and/or how movements integrate to champion diverse agendas. Stay tuned for launch plans from The Equality & Justice Alliance (EJA).