Once more, Happy New Year! There have been so many things we have been working on during the last months of 2016 that we want to share them with you. We have been working intensively in United Nation spaces, helping to ensure the appointment of the Independent Expert on SOGI. We also attended meetings and conferences in different regions and we were very delighted to launch our report on SOGIESC at the Universal Periodic Review, a joint report with ILGA and IBAHRI. We have also worked on strengthening our networks and supporting the capacity of allied activists.
Please, take a look at our latest activities.

Our joint report Sexual Orientation, Gender Identity and Expression, and Sex Characteristics at the Universal Periodic Review has been widely welcomed and disseminated in the past months. The report by ARC International, the International Bar Association’s Human Rights Institute (IBAHRI) and the ILGA World provides an overview on how the UPR has shaped the protection of the rights of LGBTI persons to date. It also addresses the challenges and the ways to try and turn the UPR into a greater mechanism to protect the rights of LGBTI persons on the ground. You can read the full report here and its summary here.

On November 9, we launched the report at a joint side event with ILGA World and IBAHRI at the United Nations headquarters in Geneva. The panel included the three authors of the report (Diana Carolina Prado Mosquera, ILGA; Dodo Karsay, ARC International; Helene Ramos Dos Santos, IBAHRI) local activists who shared their experiences with the UPR (Nada Chaiyajit, LGBTI Representative, Thai CSO Coalition for the UPR; Henry Koh, Malaysia Human Rights Specialist, Fortify Rights), states (Dianela Pi Cedrés, Deputy Permanent Representative, Uruguay), and OHCHR (Michael van Gelderen, Human Rights Officer). The panelists shared their reflections on the findings of the report, highlighting the greatest opportunities in UPR engagement, and discussing the key challenges ahead. You can watch the side event here and here.

On December 2, we presented our findings to a broad group of LGBTI human rights defenders at ILGA World’s Conference in Bangkok, as part of a workshop and a Rainbow Talk. A few days later, on December 8, we co-organized (with Outright Action International and the Mission of Canada) a launch event at the UN in New York during OutRight Action International’s Advocacy Week Programme. The panel was chaired by ARC International’s, Kim Vance, and included welcoming remarks from the Mission of Canada (Catherine Boucher) and OHCHR (Elisabeth da Costa). ARC’s Arvind Narrain took attendees through some of the key findings of the UPR research and LGBTI activists working at the local and regional level (Outright Action International’s Caribbean Advisor, Kenita Placide; the ASEAN SOGI caucus’s Jean Chong) discussed their experiences engaging in their country review processes.

We look forward to your feedback on the report. With questions and queries please contact Dodo Karsay at dodo@arc-international.net. 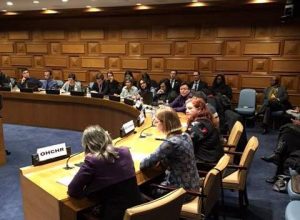 A Success in 2016:  Safeguarding the establishment of the first UN Independent Expert on Sexual Orientation and Gender Identity 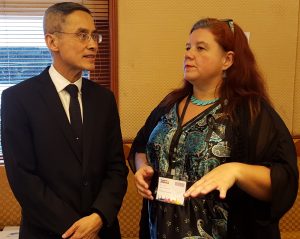 After the victory in the final vote on December 23, 2016, we stand assured that there will be a dedicated mechanism of the United Nations devoted to documenting and responding to the human rights violations committed against persons on grounds of sexual orientation and gender identity in every country around the world. 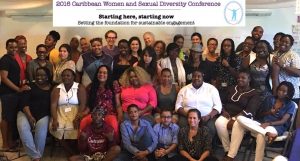 The #CWSDC2016 took place in Saint Croix, US Virgin Islands, on October 4-7. “Starting here, starting now. Setting the foundation for sustainable engagement” was the slogan and direction which guided the work during four intensive and passionate days where about 50 empowered activists convened to improve their skills in leadership and to learn from other activists’ experiences as well.
The Conference was supported by COC-Nederlands, ARCUS Foundation, Inter-American Foundation, Astraea, ARC International, and Outright Action International.

Our Communications Officer, Mariana Winocur, attended the conference and delivered a presentation on the Universal Periodic Review, sharing with colleagues how to use this UN mechanism to better advocate for the human rights of LGBTI persons. 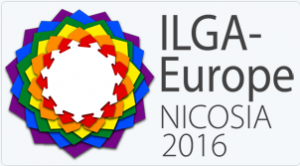 ARC’s Geneva Director Arvind Narrain and Research and Information Officer Dodo Karsay joined hundreds of LGBTQI activists in Europe at ILGA-Europe’s annual conference in Nicosia, Cyprus on October 19-22. To echo the conference motto “Power to the People” we co-organized a workshop on UN engagement with a focus on gender identity and expression issues, with TGEU, ILGA World, and COC Netherlands. Our overall goal of the workshop was that activists can relate to the UN with more trust, and see it as a powerful tool for their work at the national level.

The workshop welcomed trans and LGBI activists who wanted to be more familiar with UN human rights mechanisms. It included a general overview of how the UN can be helpful for activists and then focused on the findings of ARC, ILGA, and IBAHRI’s findings about SOGIESC issues at the UPR. Lastly, the presenters discussed Special Procedures, including the newly established Independent Expert on SOGI issues. Our panelists also included local activists working on gender identity and expression issues in Hungary (Vivien Rajz, Transvanilla) and Lithuania (Tomas Vytautas Raskevičius, LGL), who shared positive experiences and challenges throughout their UN engagement. 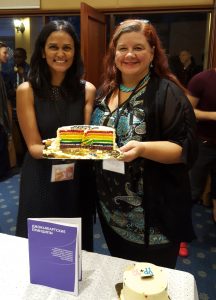 November 26th, 2016, marked 10 years since the Yogyakarta Principles were ratified by a group of experts in Yogyakarta, Indonesia. We started celebrating this anniversary with actions to highlight the impact that the Principles have had on the lives of LGBTI people.
Articles on the advances attained the last 10 years, as well as the challenges to come, have been (and will continue to be) published on our redesigned website and disseminated widely on social media.

The 10th anniversary is also a time to ensure that a YP +10 companion document will be produced to accurately reflect the developments in international law as they apply to questions of sexual orientation, gender identity, gender expression and sex characteristics. With this in mind, a Drafting Committee has been constituted and a general call for submissions has been put out to various lists. The draft produced by this committee will be deliberated upon by a body of Experts in April 2017.

The call for submissions can be found here. 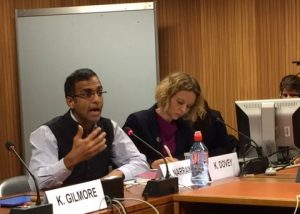 In November, Arvind Narrain presented a civil society perspective in a session at the UN Forum on “The role of companies in addressing legal and societal discrimination against LGBTI people”.

He addressed the question of what can businesses do in countries which have criminalised same-sex conduct? Would supporting LGBT rights in such a context not be against the national law? He argued that such an opinion is often not only a moral abdication of responsibility but more importantly, it is often legally wrong.  It’s important to understand that anti-sodomy laws of the British vintage in particular criminalise ‘carnal intercourse against the order of nature’. Any way this is interpreted it is about the sexual act. It is not about identity, it is not formation of LGBT associations, though it does have a chilling effect on all of these.

Executive Director, Kim Vance, and Communications Officer, Mariana Winocur attended the ILGA World Conference in Bangkok, Thailand in November. They delivered two “Rainbow Talks”: “Five thing activists should know about the impact of #YogyakartaPrinciples 10 years after” and “The UPR holds significant promise for LGBTI communities” (co-delivered with Diana Prado, from ILGA).
Kim Vance also presented and contributed to a full day pre-conference on the UN Special Procedures and co-facilitated a workshop on the UPR, highlighting our new co-published research report.

We were also pleased to co-host, with ISHR, a special reception to celebrate the 10th anniversary of the Yogyakarta Principles, featuring Co-Chair Vitit Muntarbhorn, and YP experts Mauro Cabral and Maxim Anmeghichean. 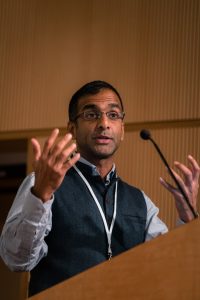 At the end of November, Arvind Narrain attended this two-day conference initiated by Avocats Sans Frontières and made a presentation titled, “Vacillating between Empathy and Contempt: The Indian judiciary and LGBT rights”.

The presentation focused on two court cases that attempted to rid India of Section 377 of the Indian Penal Code, which criminalises same sex conduct. In 2009, the Delhi High Court held that Section 377 violated the right to equality, privacy, dignity and non-discrimination. However, the forces of the opposition mobilized very strongly and filed 15 appeals against the judgment. The Supreme Court in an infamous decision on December 11, 2013, referred to by the famous Indian novelist, Vikram Seth as a ‘bad day for law and love’, voted to recriminalise consenting same-sex conduct.

The presentation by mapping out this trajectory from the victory of 2009 to the defeat in 2013 sought to answer the following questions: What did the 2009 victory enable with respect to LGBT rights in India? Did the defeat in 2013 mean that the clock was turned back on LGBT rights? Can a legal defeat be the basis for a larger political victory? 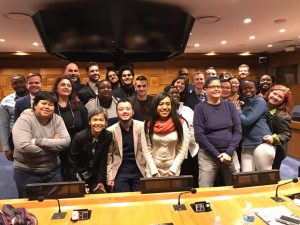 Executive Director, Kim Vance, and Geneva Director, Arvind Narrain attended Advocacy Week activities in New York in December. This intensive week of meetings with UN missions and agencies, topped off by an OutSummit was organized by OutRight Action International.
This year, in particular, presented a key opportunity to advocate with a large numbers of missions and the UN Core Group to protect the mandate of the newly appointed Independent Expert on SOGI, who came under attack at the General Assembly in New York around the same time.

The OutSummit also provided an opportunity to profile some of the amazing work of LGBTI activists around the globe, and engage in important discussions around topics like a new development index for LGBTI realities, strategies for engaging with a new US administration (which will almost certainly bring a different kind of leadership on human rights issues for at least the next four years), and human rights in the age of terror.

ARC’s webpage has been redesigned 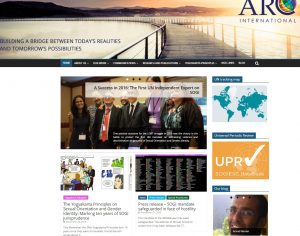 We are pleased to announce that our website has been updated and renovated with the aim of better navigation and visual appeal. Our redesigned site includes an author blog where ARC’s staff and/or guests share their analysis and points of view regarding LGBTI issues. We also have an interactive UN map with the records on each country’s Universal Periodic Review information regarding SOGIESC issues.

In the future we hope to expand this with map with information of country-specific UN voting patterns and other relevant data.

At the end of January, ARC’s Dodo Karsay and Arvind Narrain will be participating in a series of consultations with the new Independent Expert on SOGI in Geneva. ARC will also be providing support for activists from the Caribbean and North Africa to engage directly in these meetings.

We are preparing for the next session of the HRC from February 27 to March 24, 2017. While there may be few SOGI-specific references at this session, we will be engaging with various Special Procedures reports, in particular the UN Special Rapporteur in the field of cultural rights, who will be discussing religious fundamentalisms.

ARC has already been actively preparing for the 61st session of the CSW from on March 13-24, 2017. We are working with civil society colleagues and government partners to strategize about potential developments in the language of the agreed conclusions and side-events highlighting the particular realities of LBTI women related to this year’s theme which is “Women’s economic empowerment in the changing world of work”.

Arvind Narrain has been invited to be a keynote speaker at this Eighteenth Annual conference on March 25, 2017, convened by the University of Nottingham Human Rights Law Centre. He will speak about the successful battle to establish the first UN Expert on SOGI issues, which was waged over the better part of the year in the Human Rights Council and the General Assembly.