The ARC team has been very busy since the last bulletin. We have been participating in strategic meetings and conferences as well as developing interesting and useful research. As usual, we did a lot of work to strengthen and support the capacity of activists around the world.

We are happy to share a summary with you. 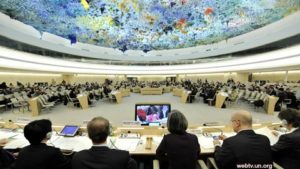 The 31st Session of the Human Rights Council provided us an opportunity to think of the issue of discrimination and violence faced by LGBTI people from an intersectional lens. ARC’s Geneva Director Arvind Narrain participated in this session where SOGI issues became a part of many important conversations during the Council.

Perhaps the sharpest light on SOGI being a part of a mainstream human rights issue came up in the interactive dialogue with the Special Rapporteur on Torture who made the analysis of torture on the basis of SOGI a key part of his Report.

Human rights defenders from all around the world met in Istanbul for an International Dialogue on the intersections of culture/tradition with human rights related to gender and sexuality.

The International Dialogue gathered not only human rights defenders from Middle East and North African countries (MENA), but also from other regions. 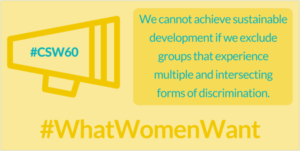 ARC participated in the 60th session of the United Nations’ Commission on the Status of Women. After two-week deliberations, CSW delivered their Agreed Conclusions that aim to diminish the gender gaps that women and girls suffer, but exclude explicit references to the particular discrimination that many people suffer on the basis of their sexual orientation and gender identity.

Although there were many expectations about its role promoting and recommending the fulfillment of all human rights to every woman and girl –thus including lesbian, bisexual, transgender and intersex persons-, in the document approved by the CSW there is only a paragraph that LGBTI persons can use as a tool to put forward whenever a human rights violation affects them. It is the paragraph that emphasizes the “increased inequality, violence, human rights abuses, and marginalization due to multiple and intersecting forms of discrimination” that persist between women and girls.

ARC, ILGA, and IBAHRI undertake joint research project to assess the impact of the UPR

The second cycle of the Universal Periodic Review (UPR) is coming to a close later this year. Since its establishment in 2006, the UPR has been a particularly important space for States and civil society to raise sexual orientation, gender identity and expression and sex characteristics (SOGIESC) issues. ARC, ILGA World and the International Bar Association’s Human Rights Institute’s joint research project will map civil society engagement over the two cycles, key trends in how SOGIESC issues have been raised by States, and assess the degree to which governments have implemented their UPR recommendations.

ARC’s research has been supported by Georgetown University’s Legal Clinic as part of the Sexual Orientation, Gender Identity, Bodily Diversity and International Human Rights Law Practicum Seminar led by Ms Fanny Gomez-Lugo. ARC, ILGA, and IBAHRI will present their preliminary findings at the June session of the Human Rights Council in Geneva and will release their final report in the fall.

Envisioning Project and “The Time Has Come” documentary 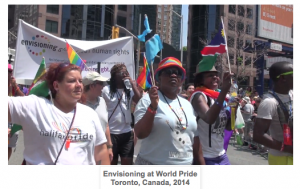 This five-year research project concluded at the end of March 2016. A compilation of the findings and analysis, including three chapters by ARC staff, will be published around October 2016 by the Institute for Commonwealth Studies at the University of London.

ARC’s Executive Director, Kim Vance, served on the Executive Committee and co-chaired the Law and Human Rights Mechanisms Team of this innovative project that involved 31 international partners and resulted in skills exchange, capacity enhancement and knowledge mobilization, and the production of numerous video documentaries, including our own “The Time Has Come”.

A final concluding piece of the “Time Has Come”, featuring footage from the passage of the 2014 SOGI resolution in Geneva, has now been added to the video, and the final product is available on our Vimeo site in three languages. 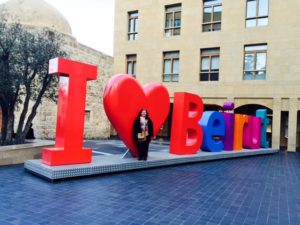 In January 2016, ARC International’s Kim Vance, and Amnesty International’s, Laura Carter, were invited by a prominent feminist organization to co-facilitate a 3-day training in Beirut, Lebanon with LGBT human rights defenders and allies wanting to bring a feminist analysis to their documentation work.

The participants came from Egypt, Sudan, Morocco, Tunisia, and Algeria. ARC will follow up with a number of these defenders to facilitate engagement in reporting to UN mechanisms in the future.

The Observatory on the Universality of Rights (OURs), of which ARC International is a member, is pleased to announce the launch of its web platform: oursplatform.org

The platform will be the go-to place for information and resources on safeguarding the universality of rights in international and regional human rights spaces.

Learn more about the OURs project

Our Research and Information Officer, Dodo Karsay will join TGEU’s training on Victim’s Rights and Hate Crime Monitoring and hold a session aiming to support trans activists in using the UN as part of their work against hate crimes.

The training will take place between 29 April – 1 May in Berlin and will bring together activists from Europe and Central Asia.

In May 2016, ARC, COC and PAI will be co-facilitating another training on UPR and other UN reporting mechanisms as a pre-conference to the the Pan-Africa ILGA conference taking place in Johannesburg, South Africa.

ARC is working with its partners and States around the upcoming UPR Working Group in May, building on our pre-session involvement in April. We are also preparing for side events and other strategic opportunities to engage in the June session of the Human Rights Council.

Please approach us if you have ideas or need assistance to facilitate participation or engagement.

At the end of May in Ottawa, ARC will be participating in a first-of-its-kind consultation with Canadian civil society groups and government representatives on shaping Canada’s foreign policy and aid around LGBTI concerns. This event is organized by the Dignity Initiative, of which ARC is a member of the working group.

ARC will be joining trans and LGBI activists from all over Europe at the 6th European Transgender Council, organized by Transgender Europe (TGEU). This year’s Council will be held in Bologna, Italy between 2-5 June 2016.

Our Research and Information Officer, Dodo Karsay will co-host a workshop with Kseniya Kirichenko, Director of Transgender Legal Defense Project (Russia) and Sanjar Kurmanov, Executive Director of the Public Union “Labrys” (Kyrgyzstan). The workshop will map how the UN can be a tool for trans advocacy and build on TGEU and ARC’s toolkit “Making the UN Work for You: A Toolkit on UN Advocacy for Trans Activists”.