The struggle against Section 377 Myanmar Penal Code: A viewpoint from India
Gender norms as violating human rights law: The 2018 Report of theIndependent Expert on SOGI
Speaking Truth to Power: What Human Rights Activists expect from Michelle Bachelet
Questioning the pathologization of gender identity: A side Event at the United Nations
Reflecting on IDAHOT’s focus on the family *

The 35th Session of the Human Rights Council saw the first side event specifically focused on mental health and transgender rights. By focusing the panel on the question of mental health, the organizers (a remarkable coalition of a range of transgender organisations: GATE – Global Action for Trans* Equality, TGEU – Transgender Europe, RFSL, ILGA World, and APTN) turned the spotlight on a troubling and vexing issue, namely the complicity of the medical profession in human rights abuses against transgender persons.

When one thinks of the medical profession one often thinks of the good the profession does. However, this side event put the focus on diagnostic categories which pathologize gender identity. The categorization of gender identity as a pathology results in treatments such as reparative therapy ,drug therapy and forcible confinement all of which violate core human rights including the right to be free from torture, the right to health and the right to be free from medical abuses.

The importance of the event emerged from Mauro’s invocation of the horrific suffering imposed on trans people because of pathologization. Mauro noted the example of an eight year old boy who was institutionalized by his family for not conforming to the gender assigned at birth and his own example of being subjected to drug therapy solely for wanting to be a boy when the gender assigned at birth was female. These are not isolated examples as these stories can be multiplied in many countries around the world where trans people continue to be subjected to medical treatment merely for being who they are.

Viviane Vergueiro, a trans activist from Brazil, noted that trans people are treated as ‘bodies to be hated’ and went on to ‘historicize’ this experience. In Viviane’s understanding the roots of this hatred lay in the colonial project with its hatred of gender diversity. Very explicitly colonization was justified by referring to the need to civilize ‘gender nonconforming bodies’. One of the forces harnessed to ‘civilize’ gender diversity in the colonies was ‘science’. In Viviane’s analysis we need to think of science as a ‘political domain’, thereby implying that scientific categorization is not always a force for good, with scientific categories themselves ‘discriminating’ against whole groups of people. The key category Viviane was gesturing towards was the diagnostic category of ‘gender identity disorder’, which is responsible for so much of suffering round the world inflicted on trans people and which is based more on societal prejudice rather than scientific reason.

This call by Viviane for looking at science within the framework of human rights was wholeheartedly taken up by the Special Rapporteur on health, Mr. Dainius Pūras. Mr. Pūras, a doctor by training offered a remarkable analysis wherein he noted that, ‘mental health diagnoses have been misused to pathologize identities and other diversities, including tendencies to medicalize human misery. The pathologization of lesbian, gay, bisexual, transgender and intersex persons reduces their identities to diseases, which compounds stigma and discrimination.’

The Special Rapporteur in his Report to the 35th Session of the Human Rights Council drew attention to the fact that the ‘bio-medical’ approach to mental health cannot be the only way of dealing with mental health concerns. He drew attention to the value of a psycho-social approach to mental health. Simply put a bio-medical model sees ‘treatment’ solely in medical terms, where as a psycho-social approach understands that social prejudice and bias are responsible for so called ‘mental health’ problems and instead of focusing on changing the patient, recommends that societal mindsets and prejudices should change. If gender identity is approached as a psychosocial issue, then the problem is not gender identity but rather social prejudice around gender identity. Trans people are not to blame for who they are, but rather society is to blame for treating trans people as mentally ill.

The fact that the concerns raised by Mauro and Viviane found an echo in the work of the Special Rapporteur on health, indicates that indeed, the tide is turning. Medical practice is increasingly being seen within the framework of human rights. One hopes that the new Independent Expert on Sexual Orientation and Gender Identity also integrates a human rights approach to medical practise in his work going forward. 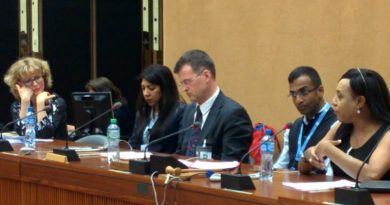