From March 13th-27th, representatives of UN member states, UN entities and more than 3,900 non-governmental representatives from 138 countries participated in the 61st UN Commission on the Status of Women (CSW) in New York. This consensus-based political negotiation is convened annually by UN Women in order to establish norms on women’s rights and gender that all signatory member states are expected to comply with. In addition to the political negotiations’ main outcome (known as the “Agreed Conclusions”), the CSW is one of the most prolific spaces for civil society organizations to gather, raise awareness and strategize on best approaches to advancing gender equality.

Given the diversity of state positions and civil society organizations present at the CSW in the current era, we always anticipate that the CSW will be a challenging space in which to defend or advance the rights of lesbian, bisexual, trans and intersex  persons (LBTI). And while this year’s CSW saw some important strategies and successes in holding the line, we also witnessed some concerning developments that underscore the very real need for human rights organizations to prevent backsliding on key issues and strategies for NGO-engagement.

Let’s start with the Agreed Conclusions: the “meat and potatoes” of each year’s CSW. Because the Agreed Conclusions are agreed upon by consensus, LBTI rights have yet to ever be explicitly mentioned or acknowledged in this outcome document, and we do not anticipate that this will happen anytime soon. From the perspective of organizations focused on sexual orientation, gender identity and expression, and sex characteristics (SOGIESC) issues, then, “success” during the CSW political negotiations is often framed in two ways:

According to these metrics, the final version of the Agreed Conclusions can largely be considered a success.

Pink-washing at the CSW

However, it is alarming to note how certain UN member states – most notably the US – somewhat disingenuously criticized the omission of LBTI persons from the final agreed conclusions. During the final hours of this year’s CSW, the US delegate stated that “[w]e regret that the final text does not mention some of the groups most vulnerable to discrimination like those discriminated against based on sexual orientation and gender identity, race, color, or religion or belief” (full text available here). At first glance this might seem like a supportive statement for LBTI persons everywhere; however, I would argue that it is unhelpful and deeply problematic for at least three reasons.

First, it does not reflect the US’s actual involvement in the CSW negotiations. The new US Administration included two organizations that actively oppose LBTI rights, as well as sexual and reproductive health and rights (SRHR), in their official delegation.

Moreover, the US did not play any kind of leadership role in fighting for the inclusion of SOGIESC language in the Agreed Conclusions – this work fell to members of other states and regional negotiating blocs. To criticize the omission of sexual orientation and gender identity, as the US delegation did, while failing to fight for this issue during the negotiations and while working alongside domestic homophobic and transphobic organizations is misleading and counterproductive.

Finally, this statement is deeply worrying because it was coupled with some hostile language about sexual and reproductive health and rights (in particular abortion), which was followed up by the US’ decision to defund the United Nations Population Fund the following week. Sexual and reproductive health and rights are intrinsically connected to LBTI rights: if we truly want to ensure equality for LBTI persons, we must ensure that, for example, trans persons are not ridiculed or turned away when seeking sexual health care, that LBTI persons experiencing sexual violence have access to responsive law enforcement systems . To suggest (however disingenuously) that the US supports LBTI rights but not sexual and reproductive health and rights is incommensurable with the goals of SOGIESC organizations and risks distancing us from the sexual and reproductive rights-based organizations with whom we often ally. The US Administration played an unproductive, hostile role during this year’s CSW and to suggest that their involvement included advocating on sexual orientation and gender identity should be called out for what it is: a misleading and calculated example of “pinkwashing.”

This year’s CSW also exemplified a deeply worrying trend of shrinking space for civil society space within the UN. Less than fifteen years ago, ECOSOC-accredited NGOs could approach delegations directly in UN conference rooms and were able to observe the negotiations. In recent years, NGOs’ access to the negotiations and capacity to contribute constructively has become increasingly restricted. However, this year’s CSW included unprecedented attacks on NGO access to the negotiations: UN Security staff removed NGO delegates with temporary passes from the UN building after 6pm on one evening, and the negotiations were also moved to a room in the UN whose entrances were off-limits to NGOs, severely restricting NGOs’ ability to engage in informal discussions with delegates and to support the negotiations by waiting in the nearby halls.  Thanks in part to substantive mobilization on the part of the women’s rights caucus (a group of women’s rights organizations from around the world who strategize collectively to advance women’s rights within this space – the SOGI caucus is a sub-group within this larger caucus), UN Women were able to reverse these developments for the final two days of negotiations.  And so, while it was encouraging to see some of the space for civil society restored, the very fact that these long-established precedents of civil society engagement during the CSW were under threat is quite worrisome.

The rise of the religious right within the CSW

The CSW has become a space in which a formidable number of Christian right-wing organizations network and actively work to try and roll back pre-existing international agreements on sexual and reproductive health and rights and recent multilateral SOGI gains. These organizations—the majority of which are US-based – have grown increasingly sophisticated in spreading their activism globally and in engaging youth (particularly from Latin America) in their mobilizing. During this year’s CSW, these organizations arguably had three main targets: abortion, comprehensive sexuality education, and trans rights. For example, the International Organization for the Family, in partnership with the Spain-based CitizenGo, and the US-based National Organization for Marriage co-organized a tour for an alleged “free speech bus” emblazoned with transphobic messages. While it’s not entirely clear how much of an influence these organizations have been able to yield on state delegations, their presence has certainly contributed to making the CSW an unsafe and unwelcoming space for some LBTI folks and SRHR activists. Due in part to these organizations’ presence, very few sex workers’ rights organizations choose to participate in the CSW, deeming it to be too hostile and unproductive a space.

And so, the Agreed Conclusions for this year’s CSW can be considered, on the whole, beneficial and productive. However, the broader context in which these negotiations took place demonstrate some alarming developments for those committed to advancing a rights-based agenda in general, and a SOGIESC or SRHR-focused agenda in particular. In terms of next steps, it’s clear that women’s rights and LBTI rights-focused organizations have an important role to play in protecting civil society space, holding states accountable to previously-negotiated language, and resisting the encroachment of the religious right within these UN spaces and among official delegations. Concerted leadership on the part of UN Women will also be critical to ensuring that issues like SOGIESC and SRHR are not rendered even more invisible than they already are. In this kind of context, successes may not look as impressive or as high profile as some recent SOGIESC gains in other UN spaces. However, within this current hostile climate, engaging in the exhausting work of simply “holding the line” is vital. 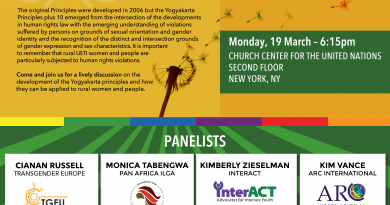